Neither economics nor physics can always be reduced to simple common sense. The Braess Paradox may not be in the same league as Schrodinger’s Cat, but like other market failures it too may have some important implications for how we manage power systems and other networks.
There is a phenomenon, well known to traffic engineers, called the Braess paradox, in which adding an additional link to a traffic network can actually increase journey times for everyone. The example below, a deliberately simplified but, superficially at least, plausible example, shows how this can come about. 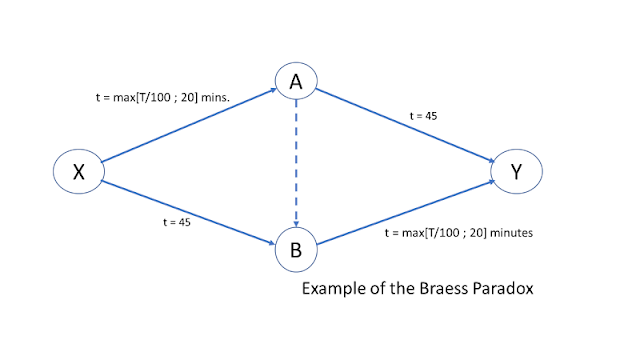 4000 vehicles travel from X to Y every hour and there is a choice of routes, via A or via B. Sections X-B and A-Y are uncongested with capacity well in excess of any likely volumes, and a typical travel time of 45 minutes. Sections X-A and B-Y, in contrast, have shorter travel times – only 20 minutes when there is no congestion, but the travel time rises with the number of cars if the volume of traffic exceeds 2000. The travel time on these links rises by 1 minute for every extra 100 cars. This is represented by the formula t = max [T/100; 20], where t is travel time, T is traffic volume, and max simply means the higher of the values in the bracket.

As drivers learn from their experiences, the volumes of traffic quickly reach an equilibrium, in which 2000 drivers use route X-A-Y, and 2000 use route X-B-Y. Whichever route is chosen the journey time is 65 minutes. The situation is stable in the following sense: if there is any significant net shift in the number of drivers changing away from their normal route, then they will face a longer journey time and are likely to revert back to their previous choice.

The paradox arises if we add in the possibility of a new connection A-B, which has a negligibly short journey time, taken for arithmetical convenience and to make the illustration simple, as being zero. Real physical examples might be a new short river bridge, or the removal of some other physical impediment to create a short new road connection. What then happens is that drivers using the X-A-Y route realise that they can reach Y faster using the new connection AB, and travelling along X-A-B-Y, avoiding the slow A-Y link. Initially this cuts their overall journey time. They are joined by drivers who had previously used X-B-Y. Unfortunately, the extra traffic on the X-A and B-Y links now raises the travel time on both links. When 500 drivers have switched from X-B-Y, the overall journey time is the same as before, at 65 minutes.

The next consequence is that all drivers previously using X-B-Y start to realise that X-A-B-Y is now faster and start to switch to that route, with result that the X-A travel time rises further. A new equilibrium is only reached when all 2000 drivers have switched to the X-A-B-Y route, adding 20 minutes to X-A travel time, and the total journey time X-Y for everyone is 80 minutes. No-one has any incentive to use the X-B or A-Y links at all.

In this new situation, once again, no individual will gain from changing their route, and everyone has an extra 15 minutes on their journeys each day. But if everyone were to agree not to use the link A-B, journey times would of course revert to 65 minutes. So what has gone wrong?

The underlying explanation of this paradox is what economists call an externality. Every additional driver on a congested route is adding a small amount to the travel time of every other driver on that route, but the very considerable extra cost (in terms of time) imposed on other drivers is not something that any individual driver can perceive directly, and it does not enter his/ her decision making. As a result, the individual "selfish" strategies of each driver result in everyone reaching their destination later.

The stable state of traffic flows, in which no-one has anything to gain by changing their individual behaviour is what economists call a Nash equilibrium; and it can be a long way from the ideal outcome.  The best solution, at least in theory, would be found by “pricing the externality”. Some form of road pricing, or an easily administered toll, would confront each individual driver with a “congestion charge” on the key routes, and would be set at a level that restored the previous equilibrium.

I had naively assumed that network flows governed by the laws of physics were immune from this paradox, which it can be argued, stems from the foibles of a world where humans fail to cooperate and markets fail to produce sensible outcomes. It turns out that power networks have their own intrinsic problems, described as a Braess paradox, according to researchers at the University of Göttingen and the Max Planck Institute for Dynamics and Self-Organization (MPIDS).[1] Whether these deserve the label of paradox is another matter.

In traffic networks, as explained above, Braess's paradox has a clear economic explanation, that of externalities, “selfish” behaviour and a suboptimal Nash equilibrium. In power grids, the issue is purely one of physics, and is due to a phenomenon called "geometric frustration." A stable operation of the power grid corresponds to a synchronous state of generators and motors, which must rotate with exactly the same frequency and fixed phase differences. Adding a new transmission line introduces new pathways for the electric power, reducing losses, but also introduces a new constraint. In certain situations the power grid cannot meet all the constraints and becomes unstable. In my view, despite the analogies with traffic flows, this is best described as physics, not as a paradox.

But the decentralisation of decision making in the electricity sector has also raised the possibility of market solutions that will operate to relieve congestion constraints in local networks. In that case there may be numerous participants connected to the grid who are making economic choices in response to incentives that reflect congestion on particular parts of the network. That is likely to mean, in any complex network, that situations can arise that are analogous to the traffic congestion example described above, and the potential for the  Braess paradox of economics will come into play.

And Implications for Future Decentralised System Operations for Power Networks

There is some evidence that decentralised networks are less susceptible to the dynamic instabilities of large complex networks caused by synchronisation issues. But, like any transport network, they will be potentially subject to the problems associated with multiple actors attempting measures to resolve congestion problems, ie the Braess “sub-optimal Nash equilibrium problem “ described above

The development of local congestion markets within power networks is still largely hypothetical, but the possible emergence of the Braess paradox is one factor that supports an important role for a distribution network operator (DNO) in coordinating the operation of the power system. That might include responsibility for some form of congestion pricing. Quite how big that role should be, and whether it extends to making the DNO the sole retail supplier for decentralised local networks, is a much bigger question on which the jury is still undecided.

In the meantime, it will be worth remembering that market failures are not just theoretical inventions. They matter and they can cause serious problems.

And see some interesting comments attaching to this blog

Does the precise relationship of traffic volume to travel time make a difference?

It has been suggested that the development of this paradox in a traffic context depends on an assumption about the relationship between traffic volume and travel time that is simply not realistic.

The illustration used here is a more sophisticated relationship than what is used in the standard description of the paradox (eg Wikipedia). The assumption on the functional relationship is that volume of traffic below a certain level has no effect on travel time, and that above that level the relationship is linear. Making the relationship more or less sensitive to traffic, or non-linear alters the outcome arithmetically. But the results are essentially similar.

The example given in the article is for a highly simplified system. But the paradox does not depend on any particular functional relationship, eg linear, between average speed or travel time and volume, merely on the assumption that increasing volume will, all else equal, always increase travel time. Nor does it depend on having a peculiar network arrangement. The mathematics makes this problem potentially a general feature of networks.

Great blog. Just a tiny point. You say: "development of local congestion markets within networks is still largely hypothetical”.
It’s not. Here’s a paper by former colleague HyeJin about it: https://journals.aps.org/prl/abstract/10.1103/PhysRevLett.101.128701 They show that blocking Blackfriars bridge might actually improve traffic flow in London!
ABSTRACT
Uncoordinated individuals in human society pursuing their personally optimal strategies do not always achieve the social optimum, the most beneficial state to the society as a whole. Instead, strategies form Nash equilibria which are often socially suboptimal. Society, therefore, has to pay a price of anarchy for the lack of coordination among its members. Here we assess this price of anarchy by analyzing the travel times in road networks of several major cities. Our simulation shows that uncoordinated drivers possibly waste a considerable amount of their travel time. Counterintuitively, simply blocking certain streets can partially improve the traffic conditions. We analyze various complex networks and discuss the possibility of similar paradoxes in physics.