SERIOUS US RECOGNITION OF CLIMATE CHANGE RESPONSIBILITIES. BUT IDEOLOGICAL DIFFERENCES NEED TO BE PUT ASIDE.


A more urgent approach to climate issues is stirring again among US politicians and opinion formers. A recent FT article highlights apparent conflicts of approach, and the need to reconcile them. In part any conflict might be seen as just another illustration of the deep ideological divide between believers in the ability of unfettered markets to resolve all problems, and proponents of a much greater role for state intervention. The reality is that effective policy on mitigation of climate change will always demand a combination of coordinated actions at government level with the powerful incentives that economic instruments can provide. There is no single silver bullet. Markets won't work on their own, and we also need both effective action on infrastructure and focused regulation.


Martin Wolf is always worth reading on economics and this remains true when he turns his attention to climate issues (The US debate on climate change is heating up. FT, 19 February 2019). This recent article suggests that informed opinion in the US, perhaps for the first time since the early days of the Obama administration, is moving towards increasing recognition of the fact that the US, widely seen as a laggard on climate related policies, cannot stand back from its global responsibilities in relation to curbing emissions. The US, as a country, still has the greatest historic responsibility for CO2 (the most significant of the greenhouse gases), even though it has now been overtaken by China on current emissions. It is also still close to the highest for current per capita emissions, where it is matched  only by a few countries such as Australia (coal once again at the heart of the problem) and surpassed in the oil states of the Middle East by countries such as a Saudi Arabia with a notorious history of wasteful subsidies to energy consumption. 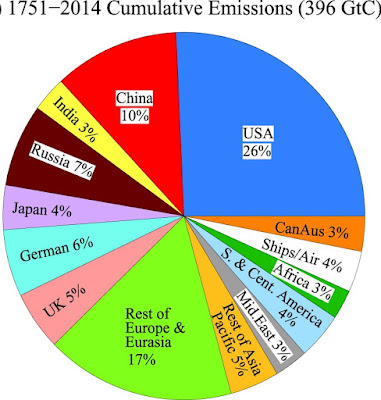 
Wolf highlights two recent announcements. The first is an “economists’ statement on carbon dividends”, endorsed by 3,333 US economists, including four former chairs of the Federal Reserve and 27 Nobel laureates. Its main elements are


·         border tax adjustments for the carbon content of imports and exports


·         prices to act as a substitute for unnecessary regulations.


This plan is also to be proposed to "other leading greenhouse gas emitting countries". 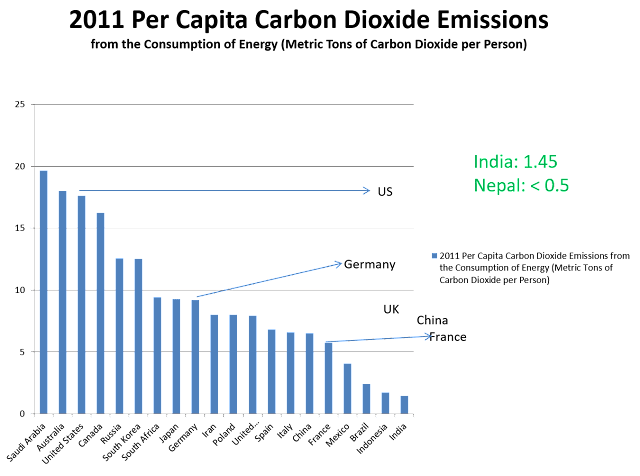 The ideas per se are not new. Most economists view emissions pricing as a necessary if not sufficient part of any solution. Others have discussed carbon wealth fund, and tax and dividend approaches. (The “Carbon wealth fund” tag links to three earlier articles.) Helm and Hepburn[1] were early proponents of border tax adjustments.  But bringing them together as a coherent package, and recognising the seriousness of the issue (where economists have often been slow), is very welcome.
The second announcement is the Green New Deal proposed by a group of House Democrats, led by Alexandria Ocasio-Cortez. It is a proposal to transform the US economy by moving to zero carbon sources for power generation and upgrading all buildings to achieve maximum energy efficiency. The approach is strong on regulatory intervention and infrastructure investment, but ignores the incentive effects of prices and markets. Activists vigorously oppose market-based mechanisms, emissions trading and offsets. With even more Utopian fervour they also dismiss major technology options such as carbon capture and storage, nuclear power, waste-to-energy and biomass energy, when the selection of at least some of these options is at least helpful, and very likely necessary for a low or zero carbon future.
Opposition to so many alternative technologies, and a refusal to countenance economic measures, sadly reduces the credibility of the Green New Deal. But we should be almost equally critical of any assumption that a pure market approach is capable of solving all our problems. (Indeed I suspect this is an assumption that may well not be shared by most of the 3,333 signatories). The criticisms are both theoretical and practical.
1.    The starting point of $40 per tonne is too low on its own to incentivise much or most of the investments and behavioural. Moreover, signalling a profile of carbon prices rising over time runs in the opposite direction to the environmental value of emissions reduction, which ought to prioritise current emissions[2].
2.    Inter alia a rising profile leads to the well-known Green Paradox[3], where fossil producers have an incentive to advance their production of the most polluting fuels.


3.    Border tax adjustments make a great deal of theoretical sense, but pose huge practical and administrative issues in measuring carbon content. Given the existing complexities of international trade, rules of origin, etc, and in the current global trade environment, they could quickly fall into a tangled web of complex negotiations and disputes.


4.    The major investors willing to fund big infrastructure projects at a low or modest cost of capital, eg pension funds and sovereign wealth funds, demand secure revenue streams that markets on their own will not provide. This necessarily implies either government guarantee in some form, or some equivalent in terms of monopoly status and mandated moves towards low carbon. (This argument is explored in more depth on another page on this site).


5.    Effective strategy is highly dependent on innovation, and the market failures related to innovation are well documented. Again this implies significant interventions as well as price signals that incentivise investment.


6.    There are numerous instances where regulation on its own can achieve significant gains. One of the most dramatic illustrations of this is the effect of the change in US road vehicle regulation, in the late 1980s, relaxing the Corporate Average Fuel Efficiency (CAFE) standards for vehicle fuel efficiency. Technical progress in engine efficiency, implying a falling consumption per tonne, but without the CAFE targets the efficiency gain simply translated into heavier (ie more wasteful in energy terms) vehicles, and vehicle fuel efficiency improvement came to an end.

It is clear that the two competing different strands for realistic climate policy need to come together. At least there is a common objective. To quote Wolf: “Time is limited, talk plentiful and action negligible. But we can only start from agreement that there is indeed a threat worth addressing.” That at least now looks possible in the US. Let us hope it can be translated into more effective policies, and not just in the US.


The reality is that effective progress depends on a fusion of the two camps. The propositions are not mutually exclusive but mutually reinforcing. Many of the “other leading greenhouse gas emitting countries”, to whom the proposals are to be put, have long recognised (as has the World Bank) that a trio of policy instruments is required.


·         Markets and taxes are the instruments with which economists are most at home, framed to reflect the massive externalities of future environmental damage that are not captured without an intervention of the kind proposed by the US economists.


·         Innovation and  infrastructure, which for the most part are only partly and insufficiently incentivised by market signals, and usually depend heavily on additional intervention with some form of government support and (typically) financial or regulatory guarantees.


·         Regulations and standards which only governments can enforce, to support  policy objectives and promote behavioural change where that is part of the solution. 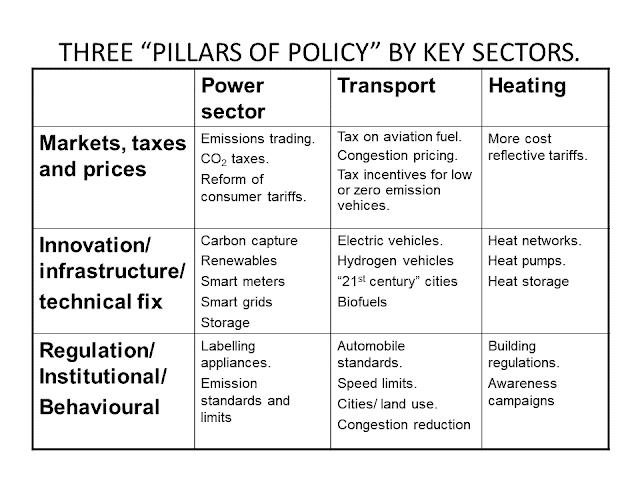 [3] The “Green Paradox” is usually attributed to a controversial book by German economist, Hans-Werner Sinn, describing the observation that policies that becomes greener with the passage of time acts like an expressed intention to expropriate fossil resources for the owners, inducing them to accelerate extraction and hence to accentuate the problems.
Posted by John Rhys at 11:45 AM