FLAWS IN EU CLIMATE POLICY BUT NO ENVIRONMENTAL CASE FOR A BREXIT.

The general case for carbon pricing as a major policy instrument in combatting climate change is very clear. So it is unsurprising that it should be the flagship policy in the EU’s efforts to assert a leadership role on climate issues. Unfortunately the policy has not to date lived up to its expectations, and the reasons behind its inadequacies mirror some of the more fundamental problems in the operation of the European Union itself. But does that mean concern to have effective climate policies should lead the UK, or other member states, to leave the EU? The answer is emphatically not.  We consider the balance of arguments.


The range of energy policy issues that will be affected by any UK decision to stay in or leave the EU have been explored in some depth in an impressive summary by David Buchan and Malcolm Keay, in  “The UK in the EU. Stay or Leave” published by the Oxford institute for Energy Studies.


The significance of the EU in carbon emissions.


Emission statistics show that the USA and China are the G2 of climate policy. Without their participation in a global agreement to limit emissions, any attempts elsewhere to limit CO2 and greenhouse gas emissions (GHG) will have at best an extremely limited impact on climate outcomes. Fortunately both countries are starting to take climate policy very seriously indeed.


Moreover the ambition of the Paris agreement is for outcomes that essentially require “net zero” policies for CO2. This implies very high levels of commitment that draw in virtually every country of any significance. But the EU as a block is still the third largest source of global CO2 emissions. In consequence it remains hugely important in global terms, and together with the G2 accounts for well over half of emissions. 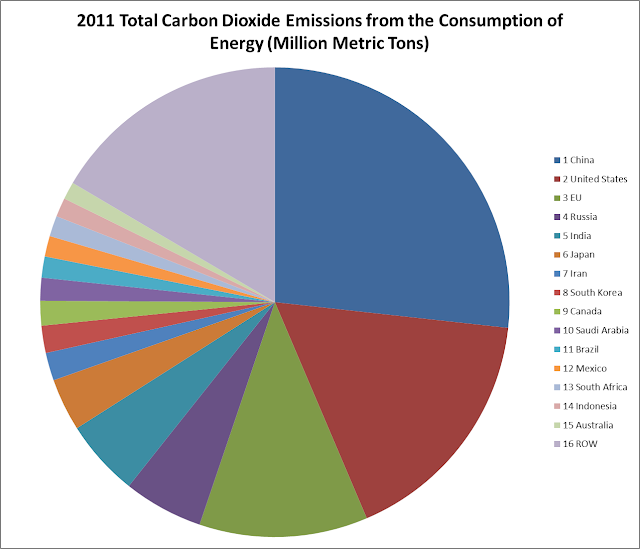 Source:chart prepared by the Union of Concerned Scientists


So if the UK wants to exert a maximum of influence in international climate negotiations, continuing to do that through the EU seems like an obvious choice. Buchan and Keay emphasise these points.  “The UK has prided itself in being, along with France and Scandinavian members of the EU, instrumental in sustaining the ambition of EU climate goals. With Brexit, this influence inside the EU would disappear, and probably outside the EU too. The global scope of the United Nations climate negotiations is such that only the big players or big blocs count, not a medium-sized European state by itself.” To put this argument in perspective from our statistics, the UK accounts for 1 to 2 percent of global emissions, while the EU accounts for about 10 times as much.


The problems with the EU emissions trading scheme (the EU ETS) are well known. They began when a number of major large users succeeded in negotiating excessively large allowances in the early stages of the scheme. Problems were accentuated by the advent of recession in 2008 and failure to adjust targets downwards.  Finally the carbon price, which is implicitly one measure of the success of the scheme, was further undermined by a plethora of additional EU-wide and national policies. This is essentially the equivalent of assuming that the market will solve all the problems, while simultaneously putting in place a string of interventionist measures, on energy efficiency and promotion of renewables, which distort what a market might otherwise have achieved. The reality, as is argued elsewhere, is that successful policy relies on a combination of instruments that can work together.


One simple explanation of the perceived failure of the EU ETS is that it represented an elementary but unfortunate confusion of means and objectives, and that this was compounded by the unwieldy nature of the EU’s decision making procedures. Most of the early proponents of a European emissions trading scheme assumed that it would provide a realistic carbon price that would provide the incentive necessary to encourage the infrastructure and other investments that would transform the energy economies of Europe away from high fossil fuel dependence to one of a number of plausible low carbon alternatives. When this failed to happen, for the reasons given above, the response was to increase the level of intervention.


In fact the EU ETS can, in a technical sense, be viewed as a success. (Undemanding) emissions targets were met, and the scheme operated smoothly.  But the real objective had never been to meet an arbitrary short term target, but a bigger implicit and unstated objective of supporting wholesale transformation of the energy sector. Had the EU adopted a carbon tax, instead of tradeable quotas, or had it had sufficiently flexible mechanisms to adjust the quotas as a response to events (including the recession), the scheme might now be viewed as a success. But a carbon tax had been ruled out as politically unpalatable, and the cumbersome process of reaching agreement between 27 countries over quantity adjustments to the trading scheme, a flexible response to changing circumstances was all but impossible.


There are other problematic elements in EU policy. Earlier comments have drawn attention to actual or potential conflicts between climate objectives and competition rules, but in practice adverse or constraining influences on the UK’s approach to climate policy have been limited. Buchan and Keay state that: “… in practice, the UK has followed an energy policy of its own choosing and has had considerable influence on the development of EU policy.  It also benefits from the opening of EU markets, and the collective approaches to decarbonisation and energy security.”


Equally we should recognise some of the general successes of the EU in environmental regulation and the likelihood that it will necessarily play a vital role in enabling the changes necessary to decarbonise road transport and in measures for the transformation of the motor industry. And the interconnection measures that are increasingly seen as essential to the future of the power sector will also require cooperation on operating and other protocols, if they are to be done in an efficient and effective manner.


The biggest damage to UK climate policies from a Brexit would undoubtedly be the loss of influence both in Europe, where the UK has been a prime mover in identifying climate risks and pressing for stronger policies, and globally. In a world where energy and climate challenges are increasingly important, these challenges will be correspondingly important in trade agreements, as no country will want to see its own industry out-competed by states that do not follow the same rules (eg on taxing or pricing of carbon). Membership of the EU gives us a better chance of being able to influence those rules, and for scientists and environmentalists to push for effective global policies.