Tragic events in the UK in the last week, the Grenfell Tower fire, remind us of the dangers of not paying attention to readily identifiable risks, and avoiding action for the sake of relatively trivial cost savings. Although it is an issue on a much much longer fuse, there are many analogies that should apply to the way we approach the threat of climate change. It’s not a simplistic cost benefit analysis. It’s about possible risks to our survival, at least in the numbers and the style to which we are accustomed today. This means a sensible approach to the avoidance of catastrophic risk. It also means understanding the science, in this case some of the dynamics of climate.


Discussions in one of the recent BIEE climate policy seminars[1], taken with some of the references that I then pursued, touched on a number of general issues that I have sometimes touched on before in this blog, or which deserve repeat at regular intervals. One is the gross inadequacy of conventional approaches to justification of climate policy in terms of a traditional cost benefit analysis, sometimes grasped enthusiastically by second rate economists as if it were a raison d’etre of their trade. Another is the notion of “tipping points”, associated with particular catastrophic risks to climatic systems, and sometimes ridiculed by climate sceptics; these are essentially points where a small marginal change in one factor, eg temperature, can completely change the dynamics of a climate system. A third is the problem of finding a rational approach to risk uncertainty, and a fourth is the importance of irreversibility. And finally I discovered, buried in an under-reported section of an IPCC report, a simple illustration of why we might want to take seriously the aspiration, from the Paris agreement, for a 1.5o C global warming target.


Let’s start with the illustration, which is a chart showing the pattern of a likely relationship between temperature. The vertical axis is estimated long term sea level rise associated with a given increase in global temperature to a new equilibrium. 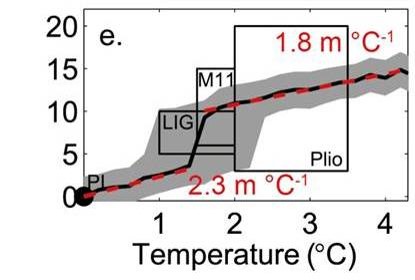 http://www.ipcc.ch/report/ar5/wg1/
Climate Change 2013: The Physical Science Basis. Chapter 13. Sea Level Change
The graph shows a step change in the long term sea level that starts as the global temperature rises. The step change occurs as global temperatures reach about 1.5o C above pre-industrial levels, and adds about five metres of sea level. It is perhaps not entirely coincidence that this is the aspirational target from Paris COP21.
What the chart shows is actually a physical phenomenon that is very easy to explain. It is the melting of land ice, in this case the Greenland ice cap. Up to that point sea level rise is slower and due to other factors such as thermal expansion or glacier melt, as well as smaller land ice reductions. Once the ice has melted it will not reform quickly or easily even if temperature stabilises or falls slightly. In other words the change is irreversible. The change also changes the climate dynamics and accelerates global warming through a feedback effect, as water absorbs more heat than reflective ice cover.
This scale of sea rise, which threatens many if not most major cities, such as London and Shanghai, and countries such as Bangla Desh, as well as much of our most productive agricultural land, might be considered an existential threat to human survival, at least with a continuing population of 8 to 10 billion. Even if this probability were considered quite small, an assumption that is by no means obvious, it is one that most people, facing such a risk in their daily lives, would take a great deal of trouble to avoid. As the simple physics of heat tells us, melting is not an easily reversible process. Land ice melting on this scale would be a catastrophe from which there would be no easy escape.
This is also an where a traditional cost benefit analysis to public policy breaks down. It fails for a number of reasons.
First there is no means to measure the scale of what the costs of serious disruptive climate change might look like, in terms of forced mass migration of hundreds of millions of people, resource conflict, and the destruction of capital assets. Integrated assessment models of the type quoted in the Stern Review, however well intentioned, are simply not fit for this purpose. Second, cost benefit analysis is actually a very limited technique, suitable for the analysis of small incremental changes. It does not deal adequately with radical choices between wholly different paths to the future. Third, it takes no account of inequality. Hardships for poor people are valued less than minor inconveniences for the wealthy.
But most important of all, it depends on the ability to quantify everything, including uncertainty. This is acceptable when it is possible to assign a known probability distribution, but in this context, and many others, that is completely impossible.
This is a field where other professions have long had a more realistic approach. Dr David Hare, a past-President of the Institute and Faculty of Actuaries, puts it very well.
“Climate change is primarily a risk management problem – one of the most important goals of climate change policy should be to limit the probability of a very bad outcome to an acceptably small value.”
The task then is not to find an arbitrary value for a carbon tax, although such a tax is a useful measure. It is to make sure, above all, that a safe policy objective is achieved. 1.5o C, far from being idealistic, may even prove to have been a dangerously conservative target.


[1] I shall not be specific as these seminars meet under the Chatham House Rule and I prefer to minimise the risk of accidentally ascribing an opinion to an identifiable individual.
Posted by John Rhys at 2:29 PM