RECORD GLOBAL TEMPERATURES PERSIST IN MARCH. BUT ARE WE ALSO STARTING TO SEE WIDER IMPACTS?
Two of the three most significant meteorological organisations have now reported on the average global temperatures recorded for March 2016, once again breaking previous records by a big margin. The chart shows the results presented by the Japanese Meteorological Agency (JMA), but the continuing dramatic surge above the ongoing upward trend has since been confirmed by results published by NASA, one of the other two acknowledged sources of meteorological data.
The graphical presentation below, which can be viewed on the JMA and other sites, shows the above trend nature of March 2016 in particularly stark form, and highlights just why climate scientists have been surprised by the scale of this sudden leap in global temperature. 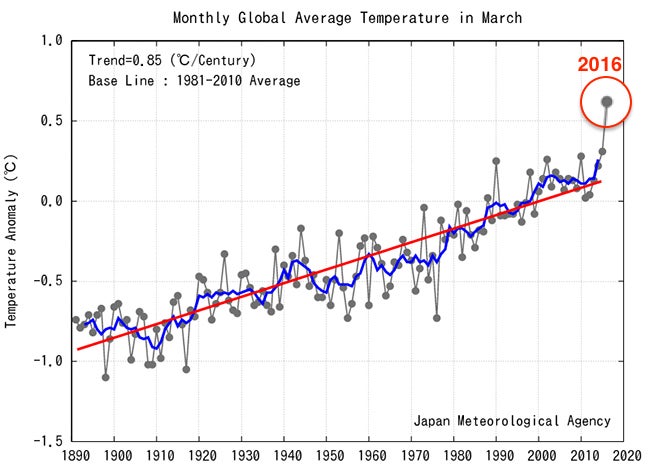 The short term leap reflects an unusually strong el Nino event, one of the strongest on record, and of a very similar scale to the 1998 el Nino effect which also caused a temporary leap in average global temperature.  Comparison of the two events can be found in an FT report of 18th April 2016, which indicates that the 1998 event was rather stronger on composite measures and about the same in terms of temperature alone, as compared to 2016. 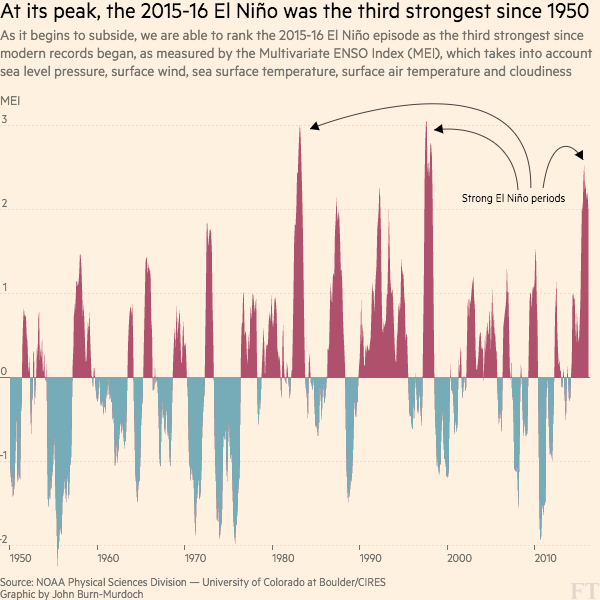 A moment of truth for the sceptics?
Global warming and climate change sceptics have placed a heavy weight on the supposed halt to or hiatus in warming since 1998. Choosing the “outlier” 1998 as the base year was always a somewhat specious statistical argument, considering the relentless upward climb in the underlying trend, but it looks as if the current el Nino gives us the chance to compare temperatures between two very similar el Ninos. The result is a very strong upward gradient between 1998 and 2016, if anything exceeding most estimates of the underlying trend.
Of course it is most probable that we shall in the next few years see a reversion to the underlying upward trend. It rarely pays to exaggerate the significance of a single observations or even of a single year. But if we do not see some falling back, then we should be very concerned that climate science has seriously underestimated the risks we face.
Why are the numbers subject to this kind of volatility in the first place?
Given that the basic mechanism of warming is well understood in scientific terms, one might expect that it could be simply described in terms of the effect of a more or less constant net heat gain for the planet from solar irradiance, until a new thermal balance was reached. However there are a number of reasons why the reported results might be more volatile than this implies. First there may be some natural variation in solar radiation,eg related to the sunspot cycle. Second the earth has chaotic weather systems, which also have some influence on the amount of heat the earth absorbs in any given period.
But the biggest issue is probably that of measurement. Measuring surface temperatures, which is essentially what the regular global temperature measures are, is really only covering about 10% of the additional heat content. Perhaps 90% is to be found in the oceans. What el Nino does is to stir up the balance, temporarily, so that more of that heat is to be found in the atmosphere.


And the human impacts may be getting serious too.


We are also now seeing a stream of reports on climate impacts. It may be hard to relate these directly to anthropogenic climate change but they do illustrate the scale of importance of even quite small perturbations in climate.


One is coral bleaching. El Nino and the general trend to warming sea waters are posing a serious threat to the Australian Great Barrier Reef, a World Heritage Site, and probably the greatest natural draw for the Australian tourist industry.


A new NASA study claims that the recent drought that began in 1998 in the eastern Mediterranean Levant region, which comprises Cyprus, Israel, Jordan, Lebanon, Palestine, Syria, and Turkey, is probably the worst drought in the past nine centuries. It would be wrong to suggest that this caused the civil war in Syria, with regional rivalries, external interference and other factors as the biggest driving factors. Water shortages and domestic unrest over the allocation of water rights were however one of the proximate triggers for the uprising, a prime indication of the possible political and human consequences of climate.


On a more optimistic note another NASA study finds a strong link between climate changes and wine harvests, noting the possibility that warmer summers can improve the grape harvest and the quality of the wine in France and Switzerland.
Posted by John Rhys at 10:42 AM