A POST GEOGRAPHY TRADING WORLD? REALLY? AND SURELY NOT FOR THE ENERGY SECTOR.

CLIMATE ISSUES, AND ENERGY TRENDS, MAY PUSH US TO A MORE GEOGRAPHY CONSCIOUS WORLD


“Mr Fox believes the world stands on the verge on an unparalleled chance to liberate global trade, where technology means countries no longer have to find trading partners so close to them” according to Nathalie Thomas in the FT, 29 September 2016.  But how does this fit with a world of increasing pressure on physical resources, growing recognition of climate problems, and low carbon energy technologies that are intrinsically geographical in their application? The theory has all the hallmarks of the “weightless economy” that was so fashionable in the run-up to the dotcom bubble at the turn of the century. As so often, a small element of truth can be exaggerated to the point of absurdity and folly. Geography matters, and in few places more than in relation to energy.
Of course there are products, like software, financial products or computer games, which are close to being weightless, and whose transport costs are minimal. Many services, in principle though not in practice, can be delivered without actual travel. In practice they can also be culture, language and legal system dependent, with strong geographical features, and do require physical travel by either the provider (consulting services) or the customer (tourism). But these are not exactly new elements in trade, and the much larger volume of physical trade in goods and commodities of all kinds, including manufactures, energy and agricultural products, continues to dominate. WTO statistics place services at about 20% of world trade by value, with trade in services dominated by transport and travel. 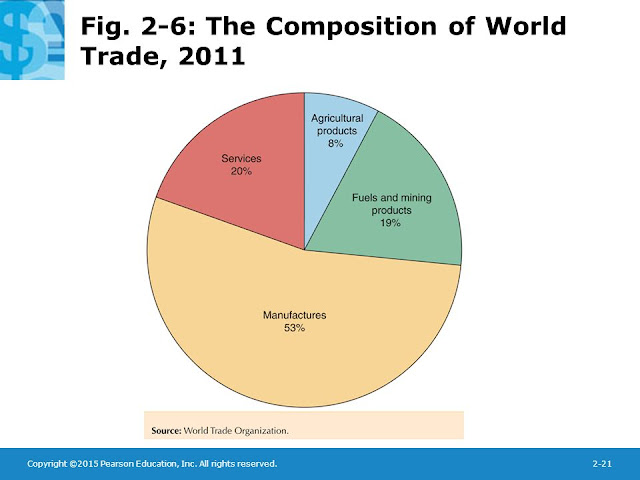 There is also the unfortunate truth that political trends across the globe are becoming less favourable to free trade, not just because of popular reactions from those who do not benefit, but because the incremental benefits of further removal of trade barriers are in any case declining.
In reality the world has coalesced into regional units (EU, NAFTA, ASEAN etc...) and the scope for reducing geographic barriers seems to rest on cross-regional trade agreements, ( EU-ASEAN, EU-MERCOSUR), or with states such as EU KOREA, EU MEXICO, EU CANADA.  Countries on the margins of such regional trade blocs are increasingly isolated and underperforming (Japan, Russia).  This is a cautionary observation for the UK. These are political considerations, and no doubt if there were new and overwhelming technical or economic advantages, we might expect to see a change. So it is worth thinking about future trends.
The energy cost of moving goods and people.
What, other things being equal, would make trade in physical goods, or transport and travel, less dependent on distance and geography? The simple answer is a big reduction in transport costs, and an increase in speed of delivery, especially for perishable items. The costs of transport are not confined simply to the costs of operating aircraft, ships or lorries. They include, for example, the energy costs of refrigerating dairy and meat products. And the cost of transport has been falling, not least because of falling oil prices.
But a big part of the cost of transport is the cost of energy and this is far more likely to rise than to fall. Transport is particularly vulnerable to future energy costs because it will depend, in a low carbon world, on new as yet only partially explored ways of converting primary energy (currently mainly oil, but in future nuclear or renewables) into suitable transport energy vectors (such as batteries or hydrogen). In the absence of technology breakthroughs not so far on the horizon, this almost certainly implies higher transport costs. Alternatively, as suggested in the recent aviation agreement and my comment on it, fuel use for transport will need to be compensated by expensive means of offsetting its carbon footprint. In either case the cost of transport and travel, taking a medium or longer term view, seems set to rise.
The trade in energy matters too.
Historically the dominant energy commodities in a truly global energy trade have been oil and coal. Gas has also grown substantially, and should push out coal and oil to a significant degree, but apart from some LNG (with its high transport costs), is pipeline dependent. It is certainly not an emblem for a post geography world.
In future the most important growth areas for energy trade will arise through first, physical interconnection of power networks, and second the potential for trading in the scarce resource of allowable carbon emissions.  Physical interconnection necessarily involves “finding trading partners in close proximity” to paraphrase Dr Fox. More than that, the least cost and most effective interconnection investments for the UK will depend not only on protocols for trade with its closest neighbours in the EU, but also a highly coordinated approach to network design and most likely significant agreement over the sharing of costs. Long distance interconnection is a great idea in principle, particularly if it can move across time and climate zones, but it is in a more remote future and will depend on more local interconnection as a precondition.
On carbon emissions, there is at least a structure in place for EU carbon trading, even though it is one that has so far failed to prove itself adequate to the challenge of low carbon objectives. It is therefore a structure that could be expanded more widely to embrace a more global trade, and could be mutually beneficial to participants. Carbon trading transactions themselves may be weightless, but a market depends on a high degree of trust and common practice among the participants, exactly what is intended to be achieved within a single market. So carbon trading, for the moment at least, is confined by geography.
An unparalleled chance to liberate global trade?
Not quite. There will be plenty of global trade associated with energy, but potential rises in transport costs will continue to maintain or even increase the importance of geography.