Arctic ice has for some time been a key indicator of the scale of global warming, and the pace at which ice cover is reducing has become a major demonstration of a global threat. Summer Arctic ice is not just an indicator (along with surface temperatures or sea levels). It also has the potential to be an important factor itself, in accelerating the pace of global warming and climate change. One reason is that ice cover reflects solar radiation to a much greater extent than open water, so loss of ice will increase the rate of warming. What happens to the Arctic also has knock-on effects on climate across the globe.


Some scientists are now so concerned at the potential consequences of the evident and increasing loss of Arctic sea ice that they have proposed a massive geo-engineering scheme in an attempt to reduce the rate of ice loss and stabilise ice cover. The basic proposal is to build up to 10 million wind powered pumps which could be used to increase the thickness of ice during winter. The giant water pumps, placed on buoys floating in the Arctic Sea, would take up water from beneath the ice, store it in a tank and then spray the water on top of the ice. The top of the ice sheet is the coldest part, so getting the water on top of the ice would make it freeze faster, according to one of the proponents of the scheme, Professor Desch of Arizona State University. 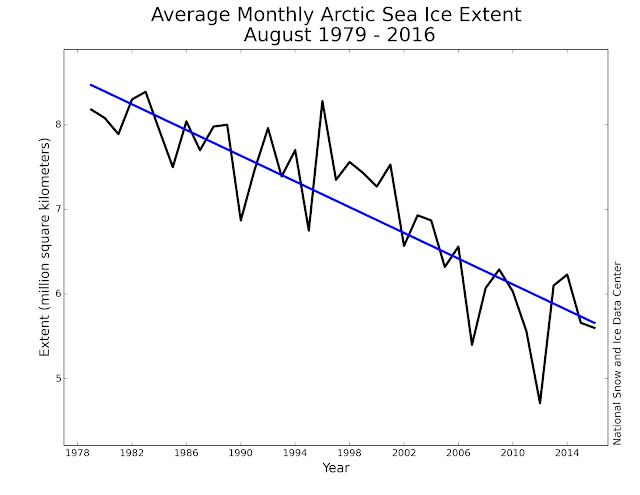 The proposal faces some obvious objections and questions. One is an assessment of whether the measure would be both effective, in thickening the ice, and whether it would be practical in terms of engineering challenges and realistic in terms of financial cost. Moreover this is at best a sticking plaster. It is not an alternative to reducing greenhouse gas (GHG) emissions in order to mitigate and limit future damage.


However the proposal is in one sense a milestone. It marks the end of a period when the climate debate appeared to be primarily about reducing present fossil fuel consumption in order to avert long term, and for climate change deniers and sceptics, unproven consequences. The evidence of Arctic ice melt is now incontrovertible, and Desch and others claim that the Arctic is now warming twice as fast as climate models were predicting only a few years ago. On some measures recent polar temperatures have been up to 20o C above average. Incredibly, there are still plenty of websites pumping out misleading information to suggest nothing is happening. But the serious debate will inevitably shift to how the world copes with the consequences, adapting as well as trying to prevent or limit warming.


This is arguably the first time that a serious geo-engineering “solution” has been proposed as a means to address a very specific threat from a warming world, and has caught the imagination of serious scientists.  In the language of climate policy, we can describe this kind of measure as adaptation to a warming world, a piece of geo-engineering which will postpone some of the climate change impacts of a melting Arctic. The boundary between mitigation and adaptation is in practical terms a rather fuzzy one. It is usually assumed that adaptation will consist of series of local initiatives, for example in flood defences, whereas mitigation very obviously depends on global cooperation. This proposition makes it clear that adaptation will also be a global issue.


The scale and ambition of a project of this kind mean that many people will dismiss it as fanciful or even hare-brained, and I suspect the most that we should reasonably expect in the near term is some pilot exercises to test whether such a scheme could be effective. That would involve quite modest expenditure, easily justified as creating an option for the future, another possible instrument that we may welcome as the climate consequences of our past failures to manage emissions become more apparent.


The full cost of the scheme has been provisionally estimated as 500 billion dollars over a period of about 10 years. This may seem a very large sum but an annual figure of about 50 billion dollars is, to create a sense of perspective, approximately the exit fee (cost of residual liabilities) estimated for the UK in leaving the European Union. In other words it is big enough to attract political controversy, but as serious economic and financial commentators have observed, it is in macro-economic terms relatively trivial.


And there are some deeper lessons to learn, and questions to ponder, that arise simply from thinking about this ambitious project.


One is that we shall soon be moving from an era of non-binding targets and emissions promises to one of real, difficult and immediate choices. This immediately raises questions of who is going to pay and what decision making processes, in what international settings, will determine the choices that are made.


Another is the analytical question of how these choices might be evaluated, assuming a suitable institutional framework were in place. There will be many more geo-engineering proposals, targeted both at mitigating or limiting change and at adapting to it. Some of these may be national and local. Others may have negative spillover effects on neighbours, and unintended consequences.
The proposal provides just a first indication of the potential costs of adaptation to climate change. It is likely to be followed by many more.
Posted by John Rhys at 5:42 PM