Hitachi unwillingness to proceed with the Wylfa project represents not only a crisis for the future of large scale nuclear projects in the UK, but also casts doubt on the competence of our governments to implement low carbon policies, or for the country to secure the investments it needs within the current market and ownership arrangements. It follows on from cancellation of support for carbon capture, after the private sector had sunk hundreds of millions of investment, and more recently for the renewable tidal lagoon programme. For this and other reasons it is time to question many of the basic policy and economic assumptions that underpin the current organisation and governance of the sector.

"Time for a realistic appraisal of our liberalised market experiment.  Is this the end of the road for the wilder free market fantasies of the 1990s?"
……...
We are in the UK currently witnessing a number of testaments to the failings of structures set up in the 1990s, and after, as an important and widely acclaimed part of the Thatcherite revolution to reduce the role of the state and re-invigorate the disciplines of the marketplace. This has been most evident in the spheres where permanent contact, and conflict, between public policy and private incentives is almost unavoidable. For the UK the most salient current examples are probably:


·         Transport, where public dissatisfaction with prices and service quality on the railways is reaching new heights, and, some allege, the level of subsidy exceeds that given to the pre-privatisation network.


·         Health, where the notorious Lansley reforms have proved to be either useless or counter-productive in making the NHS “internal market” more effective.


·         Oil, where the failure of the private sector to make adequate provision for North Sea decommissioning places a potential bill on taxpayers estimated at £24 billion, a number not much smaller than the £39 billion the UK will be paying as it leaves the EU (and the latter number is much less likely to escalate).


This is a big subject, so today’s comment is confined to the power industry and a little bit of its history.  We do of course need to recognise that electricity privatisation did indeed achieve some important gains. Most notably the move away from self to independent regulation and into private ownership created the financial incentives for efficiency in electricity distribution, where costs fell substantially. It’s also true that the previous governance structure of the industry was far from perfect. As a 1980s Chief Economist at the somewhat dysfunctional Electricity Council, then tasked with the sector’s regulation, I observed that the old CEGB had a degree of professional arrogance, a tendency to goldplating investment and poor investment decisions, and also disregard for the interests of consumers and the downstream distribution sector. It was in some ways far too independent of political control. On the positive side, it was always highly professional and inter alia contributed substantially to UK science research efforts in ways that have since been badly missed.


The structure set up at privatisation, to which I also contributed, was also a success, at least in the short term. Its most remarkable achievement, however, was to replicate the reliable, efficient and internationally admired operation of the National Grid. This was to change from a centralised command and control of plant dispatch in ascending order of cost, the so-called merit order, with a market system that could, as a matter of both principle and practice, deliver the same performance from the existing collection of power stations. The seamless transfer from public to private, and from command and control to a free market and private ownership, was achieved without the misfortunes that were to dog the privatised rail network a few years later, where the network management in essence “lost control of the assets”, inter alia leading to some tragic accidents.


But if operational efficiency was maintained, and distribution costs reduced, successful transition to dependence on private sector investment was much less clear. The market arrangements were designed to allow the threat of power shortages to induce price rises that would incentivise enough capacity through very large “price spikes”.  Together with initial animal spirits and the coincidence of radical technology change (combined cycle gas) with cheap gas, along with guaranteed markets for some of the investors, this all worked for a while, but it was not long before the cracks started to appear. Government and the then regulator refused to accept the logic that deficient supply could in principle drive higher prices and that these would be essential, in the absence of any other commitments to investors, to get new capacity built. The original market mechanism designed to act as a signal for new capacity was abandoned with the new trading arrangements in 2000. Since then there has been no substantial new investment in generation that has not relied either on long term contractual guarantees, as with the nuclear programme, or on similar levels of guarantee through feed-in tariffs.


The government has in practice been wholly unable to escape responsibility for sector investment. As the Hitachi episode, among others, shows, this has brought its energy policy, and the pretence of relying on private sector finance, close to collapse. However that pretence has brought its own costs. Complex financial structures, as with private finance initiative (PFI) projects, have been successful mainly in raising the cost of capital, as compared to keeping projects on the government books.


These are far from being the only problems with the new market structures that have been allowed to evolve since 1990 and 2000. Others include the continuing EU wide absence of carbon prices necessary to promote low carbon policies, failure of the sector structure to promote rational tariffs either now or for the future, inappropriate loading of social and other costs into consumer prices, and widespread dissatisfaction with energy supplier profit margins.[1] All of these subjects are extremely important and deserving of more analysis.[2]


Nor is there any evidence, on the basis of international price comparison[3], that the UK, or at least its consumers, have benefited from the path breaking reforms of the Thatcher era. The table below compares UK and French domestic electricity prices over the last three years. The relative position of the UK benefits significantly from the exchange rate decline after the 2016 referendum. France, a near neighbour and similarly sized economy, is chosen as an interesting comparator because it has had a much more centrally controlled system, and, unlike the UK, has benefited from a successful nuclear programme. 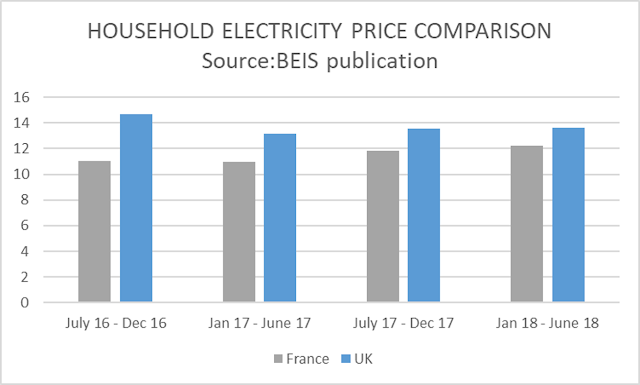 The comparison of prices to large industrial consumer prices, which are a closer measure of generation costs, show a similar picture. 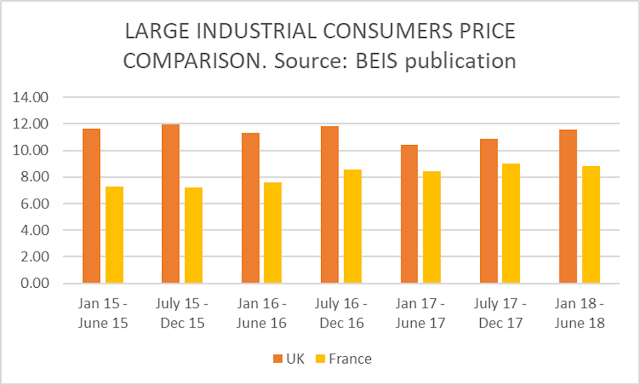 This shows the small but significant improvement in the UK’s position attributable to the post referendum fall in the exchange rate. But the larger gap, as compared to households, also suggests that UK “competitive failure” has been manifested mainly in power generation.


All of the above leads to the suggestion that all is not well with energy sector governance in the UK. Widely acclaimed as leading the world in the 1990s, the reality has been that the UK’s liberalised market frameworks have simply not delivered within a 21st century environment. Surely this is the time for a comprehensive re-appraisal.

[1] A number of these tariff issues are discussed much more fully in the author’s paper prepared for Energy Systems Catapult, and published by them as
Cost Reflective Pricing in Energy Networks.  The nature of future tariffs, and implications for households and their technology choices. April 2018.
[2] A much fuller discussion of these points is also given on another page on this site, Low Carbon Power, and also the author’s “think piece”, published in 2016 by the Energy Technologies Institute on how to deliver efficient networks for a low carbon future energy system. It aims inert alia to set an agenda for a future power systems architecture.
Enabling Efficient Networks  for Low Carbon Futures: Options for governance and regulation. 2016
[3] Price comparison data is taken from sources published by BEIS and is readily available online.
Posted by John Rhys at 4:13 PM