At a time of chaos in national politics (with our new UK prime minister) and international crisis, it may seem frivolous to write about the mathematical concepts of chaos theory. Analogies can indeed be drawn between seemingly trivial chance events in politics and “chaotic” or seemingly unpredictable situations and outcomes like Brexit. But this blog is concerned primarily with energy, low carbon, and climate issues and policies, to which the world will be increasingly turning its attention when Brexit is done and dusted. In the absence of much immediate policy discussion on that front, it is perhaps a good time to cover a subject that is at the same time both arcane and interesting, and to speculate on what we might learn from that discussion.
…………………….

Could a butterfly flapping its wings in China set off a tornado in Texas? This rather fanciful idea is of course incapable of being tested, but it has nevertheless been used to describe chaos theory, and is in reality rather misleading. Since weather and climate systems are indeed genuinely “chaotic” as defined in terms of the mathematics of chaos theory, it is important to understand what this might mean for our understanding of climate science, and what chaos theory might or might not tell us about predicting either weather or climate.

Chaos in this context does not have quite the same meaning as chaos in everyday language. So it is worth stressing what it does not mean.


·         Chaotic behaviour does not mean behaviour that is not governed by well understood rules.


The definition of a chaotic system, in the mathematical sense, is one in which very small changes in the initial conditions, sometimes called boundary conditions, will have a very large impact on the actual state of the system at more distant points in the future. It is comparatively easy to find examples, even in the relatively simple world of Newtonian mechanics, and one does not need to assume the deeper uncertainties of quantum theory, or waste time on the rather fanciful and unverifiable claims about the impact of a butterfly’s wings.

All of this matters in understanding what chaos theory can tell us in relation to climate and weather. The close connection is emphasised by fact that it was a climatologist, Edward Lorenz, who is credited as one of the founders of chaos theory.  The phenomenon is closely associated with the differential equations that can be used to describe weather and climate systems.

One of the best (because it is simple) illustrations of the nature of chaotic systems is provided by the double pendulum – two rods hinged at their junction, with a weight at the end of each.


The article explains the nature of the double pendulum. Its behaviour is governed simply by Newtonian mechanics, and can be described by a set of differential equations, which are solved in order to produce the simulated behaviour that the article then illustrates.

The reader is invited to experiment with this link, changing the relative size of the weights and the initial angle, which corresponds to the amount of potential energy the system has at the start. When the system is charged with relatively low amounts of energy, its pattern remains fairly close to that of a conventional single pendulum, and will continue in this pattern indefinitely, as we can see from the picture below. 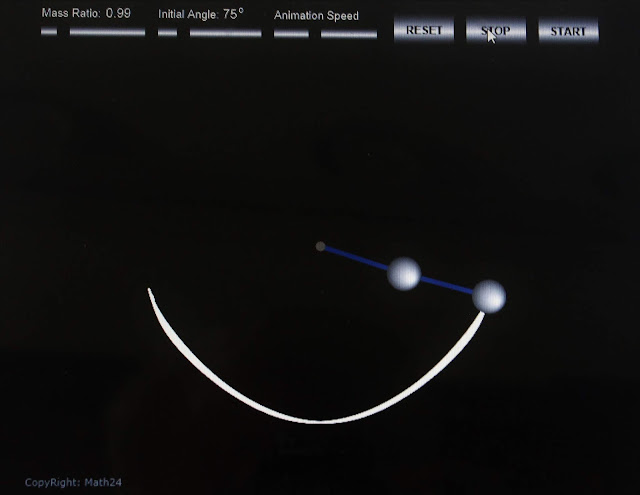 However a small increase in the amount of energy above a certain level creates a highly chaotic system, observed in the second picture, and giving rise to much more complex and unusual patterns of motion. 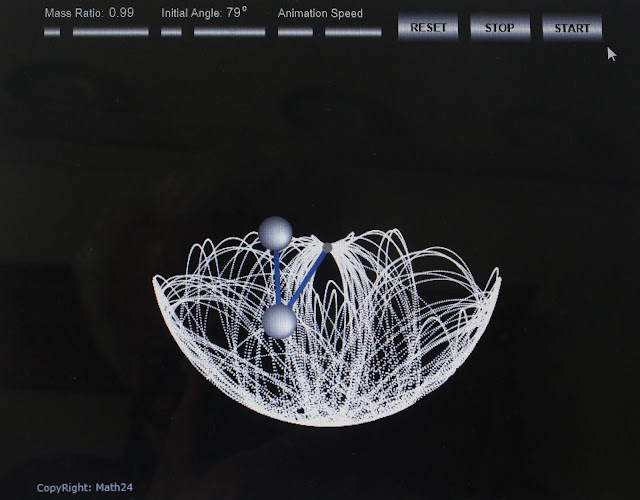 So what analogies might we draw from this simple example. I suggest there are two.

The first is simply that the injection of more energy into any physical system tends to make it more turbulent and chaotic, something that will seem intuitively clear to many people. In the case of weather and climate, the extra energy is the "warming" injected by radiative forcing. Its effects might include obviously turbulent events such as hurricanes, but might simply mean a wider variety of new or unusual weather and climate patterns. Identifying those possibilities is of course a significant part of what climate science is about.

A second analogy is that there are indeed “tipping points” or extreme non-linearities of response. At a certain point the extra energy injected into the system, raising the initial angle from 75 to 79 degrees, induces much more unstable and "chaotic" behaviour, and a much wider range of "extreme" events. The parallels with the dispute over tipping points, often ridiculed by climate sceptics, are clear. Far from being speculative scare stories, the illustration shows that tipping points can be a major feature of even highly simplified chaotic systems.