CRUISE SHIPS GET A BAD PRESS ON ENVIRONMENT.


Are they significantly worse than aviation? In any case the same policy issues, of failure to price or tax CO2 emissions, are relevant.


My last posting addressed one of the issues arising from the failure to price any of the carbon/climate externality of aviation into the cost/price of aviation fuel. Among other things this has, in the absence of low carbon aircraft alternatives, encouraged a possibly unsustainable expansion of demand for travel, and distorted the choices that travellers make between different modes of transport. In that posting I compared the emissions impact of flying and driving for a hypothetical choice of holidays travelling 2000 km on a round trip to the South of France; the key measure was grams of CO2 per passenger-kilometre.


But the issue is not confined to aviation. The same problems arise for shipping. Greenhouse gas emissions from all forms of international transport contribute to anthropogenic global warming, but were never covered under the Kyoto Protocol and continue to escape effective action, in the form of a carbon tax or a carbon price, to limit emissions and mitigate climate impacts.


So it seems fair, in this context, to consider the impact of another alternative type of holiday. More recently there has been much criticism of the negative environmental impact of cruise ships. This is by no means confined to emissions, and includes the overcrowding impact of very large cruise ships on major tourist destinations, such as Dubrovnik or Venice. Ships also tend to use heavy fuel oil which is particularly bad in terms of its immediate local consequences on air quality.


But the most serious issue for shipping is CO2 emissions, and, in terms of comparison with other choices for personal travel, some attention has been given to measuring these. Most published information on emissions statistics comes from the cruise companies, and it is not always easy to draw exact comparisons with other modes of transport.  Among other factors emissions per passenger-kilometre may be a rather poor metric since so much depends on the length and nature of the journey and the consumption of fuel for powering on-board services (lighting, catering, etc). And cruises will tend intrinsically to cover shorter travel distances, so some holidays based on short haul cruises will lead to lower emissions than some long-haul flights.


The BEIS has also put a figure on ferry transport - 18g of CO2 per passenger kilometre for a foot passenger, which is less than a coach, or 128g for a driver and car, which is close to our earlier figures for a long-haul flight. But ferries ages and efficiency will vary around the world - and a ferry won't get you to the Caribbean, although a cruise ship or ocean liner would.


A 2010 paper[1] in Energy Policy presented the results of research into international cruise ship journeys to and from New Zealand. CO2 emissions from such journeys were calculated using an activity based, or “bottom-up”, model. The estimates for individual journeys by cruise ships to or from New Zealand in 2007 ranged between 250 and 2200 g of CO2 per passenger-kilometre (g CO2 per p-km), with a weighted mean of 390 g CO2 per p-km.
Carnival Corporation and plc, which owns nine cruise lines, claims its 104 ships emit an average of 251g of carbon dioxide equivalent per "available lower berth" per kilometre. Given improvements since 2010, this seems consistent with the earlier study which had argued that values similar to those of economy-class air travel could be obtained. 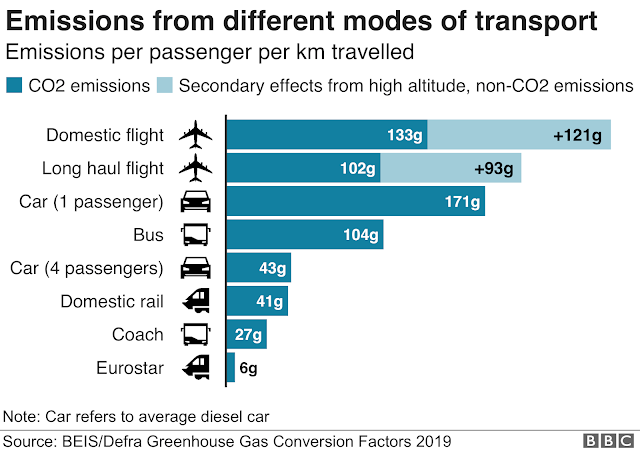 
The Energy Policy paper also calculated price elasticities and international cruise journeys for transport purposes were found to have a greater relative decrease in demand than plane journeys if the impact of carbon pricing was analysed. In other words, putting a price on the environmental damage would be even more effective in reducing emissions from cruise ships, reducing demand for cruises as a preferred holiday option and incentivising cruise companies to develop cleaner solutions.
There is often a “shore-side” perversity as well. The absence of any penalty on burning heavy fuel oil means that ships will also continue to pollute the local environment in port when it would be a straightforward matter to power on-board facilities through connection to the local electricity network, which will often be based on a cleaner fuel mix.
Once again the transport and travel sectors provide a textbook illustration of the need to reflect clear externalities into the pricing of travel, so that consumers can make choices that come closer to reflecting a balance of personal benefits and societal damage. The evidence is that this can work both by shifting demand to less “carbon-intensive” activity , and by reducing the environmental impact of supply.