DEATH OF THE WASHINGTON CONSENSUS

From the pure doctrines of neoliberal thinking the intellectual pendulum has been moving back from market fundamentalism towards more ambivalent and centrist positions on the role of policy interventions by the state. Nowhere is this more true than in the vitally important power sector and its pivotal position in addressing climate issues. A major review from within the World Bank confirms this trend.

The phrase Washington Consensus was first used in 1989 by the economist John Williamson to describe prescriptions on policies for macroeconomic stabilization, opening of markets to trade and investment, and the expansion of market forces within domestic economies. Subsequently, and to his dismay, it was given a wider meaning, to refer to a more general orientation towards a strongly market-based approach (sometimes described as market fundamentalism or neoliberalism). The distinction is huge, and Williamson has argued  that his original, narrowly defined prescription is now  broadly taken for granted, enjoying the status of "motherhood and apple pie", but that the broader meaning, as a kind of neoliberal manifesto, "never enjoyed a consensus in Washington or anywhere much else" and can reasonably be said to be dead.[1]

We are now seeing the gradual but measurable decline in influence of the more fundamentalist market philosophies that have dominated the last 30 to 40 years. For much of that time, the power sector, long a natural monopoly, has been in the nature of a laboratory for market-centric philosophies. A  main obsession of policy makers in the power sector has therefore been pursuit of a so-called market liberalisation agenda. Nowhere was this more prevalent than in major international institutions. These included the Energy Directorate of the Commission of the European Union, in its vision for a single integrated European energy market, and the World Bank, in its prescriptions for developing countries. The prescriptions were often strongly influenced by what came to be known, perhaps inaccurately, as the Washington Consensus. For electric power this meant several key characteristics:

·         vertical and horizontal unbundling of what were often fully integrated utilities; corporate separation of generation from the wires businesses of the transmission (high voltage) and distribution (low voltage) networks, and also from retail supply, and also division into multiple entities in generation and distribution.
·         the establishment of an independent regulator for the sector, and formal regulation of the residual elements of natural monopoly.
·         privatisation of all the unbundled entities.
·         ensuring the maximum of competition in all aspects of the sector, but particularly in generation and supply.

Paradoxically for an industry that had always, due to its combination of economies of scale and real time command and control, been regarded as a natural monopoly, reforms to open up the sector also became something of an icon for free market enthusiasts. If this industry could be converted to a collection of markets then anything was possible.

The UK had led the way when it came to reform. In 1990 the UK wholesale market was deregulated, competition was promoted and the industry was privatised. The European Commission enthusiastically encouraged other EU countries to follow this lead and liberalise their electricity markets. This was the dominant direction of travel, even if progress was both slow and partial. In France, in particular, the market is dominated by state-owned nuclear power, has a single transmission and a single distribution company, and remains one of the most successful power sectors in Europe, as is indicated by the comparative price figures shown below.

Meanwhile the UK, after attaining something close to theoretical perfection by the late 1990s, has, over the last 10 to 15 years, abandoned a number of the basic tenets of the fundamentalist philosophy. Government has intervened both through the introduction of price caps[2] and by making major decisions on, as well as underwriting of, new investment in generating capacity. Unsurprisingly leading free market enthusiasts such as Carlo Stagnaro[3] now write that “…in the EU, and the UK in particular, the liberalisation of the electricity market is rapidly being reversed and replaced by old-fashioned command-and-control policies.” 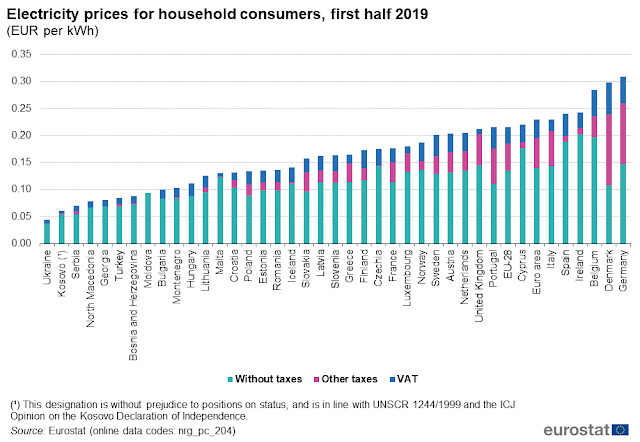 There are a number of good (as well as less good) reasons for this dramatic shift in policy direction.[4] An important one is the increasing emphasis on policy for reducing CO2 emissions, where the EU’s emissions trading scheme (ETS) has proved inadequate to the task of generating realistic carbon prices consistent with ambitious emission reduction policies. Another is the intrinsic failure of liberalised market structures to provide the incentives necessary to induce new investment in long life generation assets. A third is a failure to adapt spot markets designed by and for fossil generation plant operators as they become increasingly unworkable in a world dominated by the technical characteristics of renewables, nuclear and energy storage. A fourth is that even in its most liberalised form the power market has always retained significant elements of command and control, as well as a significant and complex role for the network operators who remain as natural monopolies.  And, finally, competitive retail markets, where they exist, have not delivered significant benefits to consumers and do not command widespread public approval.

But the bottom line is that the paradigm of energy markets free of significant intervention has been quietly dropped. Certainly, privatisation of the monopoly network components of the sector, with effective regulation, has brought some efficiency gains. But governments have also recognised their continuing responsibility for maintaining reliable and sustainable supply. In the UK there has been a dawning realisation of the need to reverse direction and head downhill from the sunlit uplands of the reform purists, and will shortly see it meeting an EU still struggling half-heartedly towards the summit.

And in developing economies? A recent ESMAP[5]  (World Bank) review suggests a major loss of faith in the Washington Consensus.

In the home of the Washington Consensus, the World Bank has long been attempting to improve power sector governance in developing countries, often using the liberalised market paradigm as an ideal. The typical underlying problems in much of the developing world are well known. They include arbitrary and inconsistent political interference in the sector, inadequate cost recovery (which in turn limits funds available for investment), and managerial inefficiency in state monopolies. World Bank prescriptions invariably contain many sensible proposals to remedy these problems, but they also pushed the comprehensive free market agenda far too hard in a sector that had always been recognised as one of the most difficult in which to create a genuine and effective competitive market. The  results were predictable. An extremely valuable recent review[6]  by ESMAP reviewed experience across a wide range of countries. The lessons are revealing.

Only one in five countries implemented both vertical and horizontal unbundling of utilities, separating generation transmission and transmission from distribution and creating multiple generation and distribution utilities. Restructuring is intended primarily as a stepping stone to deeper reforms, and countries that went no further tended not to see significant impacts. Indeed, restructuring of power systems that are very small and/or poorly governed … can actually be counter-productive by reducing the scale of operation and increasing its complexity.

Although many countries enacted solid legal frameworks, the practice of regulation continues to lag far behind. For example, while almost all countries give the regulators legal authority on the critical issue of determining tariffs, this authority is routinely overruled by the governments in one out of three countries. … cost recovery remains an elusive goal.

Among the best-performing power sec­tors in the developing world are some that fully implemented market-oriented reforms, as well as others that retained a domi­nant and competent state-owned utility guided by strong policy mandates, combined with a more gradualist and targeted role for the private sector.

Where distribution utilities were privatized, countries were much more likely to adhere to cost-recovery tariffs. This however is a confusion of cause and effect. It will normally only be possible to persuade private investors to participate if financial viability has already been guaranteed by tariff reforms. Requiring a newly privatised business to implement tariff reforms will tend to discredit the private sector by blaming it for higher prices.

Market reforms can be helpful in improving the overall efficiency and financial viability of the power sector, and in creating a better climate for investment. However, they cannot—in and of themselves—deliver on these social and environmental aspirations. Complementary policy measures are needed to direct and incentivize the specific investments that are needed.

This is a complex and revealing story of modest successes and disappointing failures. The theoretical ideals of unfettered competitive markets and minimal state involvement have proved to be less important than much more basic goals of good governance, limiting arbitrary political interference and patronage, introducing cost covering tariffs and improving revenue collection (eg by reducing illegal abstraction). Much of this depended simply on making power sector entities into commercial organisations rather than organs of government.  All these basic reforms were in any case preconditions for the success of more ambitious targets, such as privatisation or functioning spot markets for energy trading. And developing countries will be under international pressures to face the same policy challenges as the developed world in terms of sustainability; this will continue to limit the scope for “hands off” policies for the energy sector.

To a very large extent the power sector is the future of low carbon energy provision, and its organisation is therefore a vitally important matter to everyone. The “Washington Consensus” will have had some notable achievements in promoting independent regulation, transparency, formal separation from government and a more commercial approach. But the more ambitious aspirations, for pure market structures free of policy interventions, have remained out of reach. The central importance of the sector, especially in the context of sustainable policies to address the issues of climate change, mean that governments are increasingly likely to play a major role in monitoring and supporting low carbon policies for the power sector.
[1] This summary paraphrases a Wikipedia article on this subject which also references Williamson’s observations on the subject.
[2] Earlier posting of April 2016. PRICE CAPS.  HYPOCRISY GOES INTO OVERDRIVE, BUT ARE WE WITNESSING THE DEATH OF NEO-LIBERAL PRINCIPLES FOR THE ENERGY SECTOR?
[3] Stagnaro  is a Senior Fellow of the Italian free market think tank Istituto Bruno Leoni. His comments can be found in a 2016 article Whatever happened to electricity market liberalisation?
[4] A much fuller discussion of these issues can be found using the tab LOW CARBON POWER on the top bar
[5] The Energy Sector Management Assistance Programme of the World Bank. “ESMAP is a partnership between the World Bank Group and 18 partners to help low and middle-income countries reduce poverty and boost growth, through environmentally sustainable energy solutions. ESMAP’s analytical and advisory services are fully integrated within the WBG’s country financing and policy dialogue in the energy sector.”
[6] Rethinking Power Sector Reform in the Developing World, ESMAP Background Paper, September 2019. https://www.esmap.org/rethinking_power_sector_reform