CORONAVIRUS STATISTICS AND NATIONAL COMPARISONS IN THE PANDEMIC

At one level of analysis this will be true. If the virus is going to be with us on a semi-permanent basis, and in the absence of effective vaccines or treatments, it is certainly possible that particular approaches will, post event, prove to have resulted in more or fewer deaths. For example, if the virus were to become more virulent, countries that had allowed, by accident or design, more cases to spread in 2020, may do better in 2021 and later.

Conversely, if a vaccine is developed, then the opposite will be true, and actions that have reduced aggregate infections and deaths to date will have been further vindicated. It is also true that it will be some time before statisticians manage to work around all the confusing factors associated with different data gathering practices and definitions, and are able to use what is generally seen as the most useful indicator – excess deaths.

However there currently appears to be one very simple way of describing a complex reality that, with currently available data, captures a very large part of the variance in numbers of deaths, at least between comparable nations. It is the following simplification, which depends only on the basic concept of exponential growth and decline.

Unchecked, a virus spreads with a basic reproduction ratio known as R0. For this virus R0 is currently believed to be at least 3.0 and in the early phases of a national epidemic (less than say 15% infected) this results in an exponential growth of new cases, doubling every few days.  Introducing severe restrictions on person to person contact reduces the ratio below 1.0.  This leads to a rate of decline which is still exponential, but with ratios above 0.5, the rate of decline will be much lower than the previous rate of growth. The shape of the new infections curve will be that of an escarpment, rising like a cliff on one side and falling slowly away on the other.

If we assume that all European societies are sufficiently similar (including in their health systems) that they are likely to have very similar values of R0 both in the initial unchecked phase and in the restriction phase, then they should end up with a very similar relationship between total excess deaths and the number of infections at the date of lockdown.
This is what the first chart[1] (Financial Times online, 27th May) appears to show. The number of infections at the lockdown milestone is a very good indicator of total deaths (to date). There are of course plenty of caveats, both on the quality of the numbers and the use of a logarithmic scale which tends to compress variations about the norm. Even so the relationship is strong. 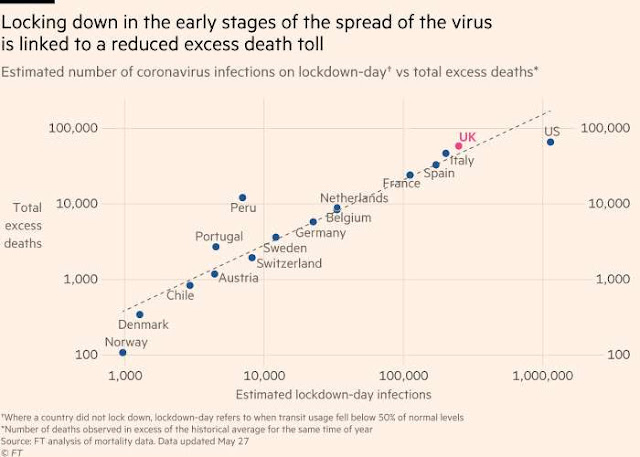 Total population size, and infections as a population percentage, is irrelevant in this context (at least while the percentage is still small). Chile has three times the population of Austria, and Germany more than seven times that of Belgium, but they can reasonably be shown as close together in the chart. The key indicator Is the absolute number. Moreover some larger countries, like Chile and Germany, managed to take the lockdown decision while their absolute number of cases was still small, and a number of Asian countries, not shown here, will have done the same.

The implication is clear. Early decisive action was what counted. Using whatever it takes -  including test, track  and trace – to maintain exponential decline  is crucial. Comparing international, regional or local values of R0, or the responses of different health systems, will have to wait until we have much fuller information.


[1] There are of course caveats to this chart. These are not final “end of epidemic” figures. Some of the initial data may be questionable. Estimates of infections at lockdown will be based partly on backcasting from later reported figures. Inclusion of the USA may be particularly inappropriate at this stage. Given the virus reached different parts of the continent at very different dates, and lockdown responses varied considerably in nature and timing between states, the USA appears to show a longer and different shaped trajectory for the disease, and to be significantly further from the point where a final total can be estimated.
Posted by John Rhys at 1:04 PM