A recent FT article argued the importance of electric vehicles in Africa, as an essential component of a global strategy to limit emissions and combat climate change. A predictable response from readers was that this was wholly impractical on the grounds of both affordability and the current inadequacy of African power systems. Healthy scepticism is fine but it should not obscure the fact that it is in an African and global interest to leapfrog to an electricity based transport technology. Electric vehicles can be part of the solution for Africa’s power systems, not just another problem.

Vome Aghoghovbia-Gafaar writes[1] on “Why Sub-Saharan Africa’s teeming cities need electric vehicles.” The response from FT readers was sceptical, making the seemingly obvious points that Africans will not be able to afford expensive Teslas, that even developed countries are struggling with the infrastructure electric vehicles (EVs) require, that Africa largely lacks adequate power supplies, and that better mass transit systems are perhaps a more immediate transport priority for Africa’s mega-cities like Lagos or Dar-es-Salaam.

Healthy scepticism is fine, but there is a wider case for EVs in Africa, and it builds on the almost universal imperative to move rapidly towards low carbon sources of electricity as a substitute for fossil fuel use. The big issues for this target in Africa are first the absence of affordable electricity, and second the unsustainability of clean economic development without it.

The global imperative is that unless we can achieve a transformation of the power sector in Africa, which enables both economic development and a switch to low carbon fuel sources, then the chances of meeting global emissions and climate targets are very low indeed. That reality should condition our judgements on the realism of prospects for overcoming the undoubted obstacles

From my experience the biggest single barrier to resolve the first issue – affordability – is likely to be the very high component of fixed cost, which especially in poor communities has to be spread over a small number of kWh. The only way to get the unit cost down is by much higher volumes, but these are often hard to achieve.

Africa has some of the highest unit costs and prices for power in the world, as well as many of the poorest people. This combination makes it particularly difficult to build the volumes, and the economies of scale, which are ultimately the only ways of bringing these costs down.

For rural electrification, involving some of the poorest communities, the World Bank has estimated kWh costs could be brought down to about 22c per kWh with the achievement of reasonable load volumes and a 40% load factor. Neither of these conditions is easily met, however. Moreover much of Africa is well endowed with solar power, but the management, even of small systems with intermittent energy, is problematic in the absence of storage or back-up. And similar issues can be expected in urban systems. 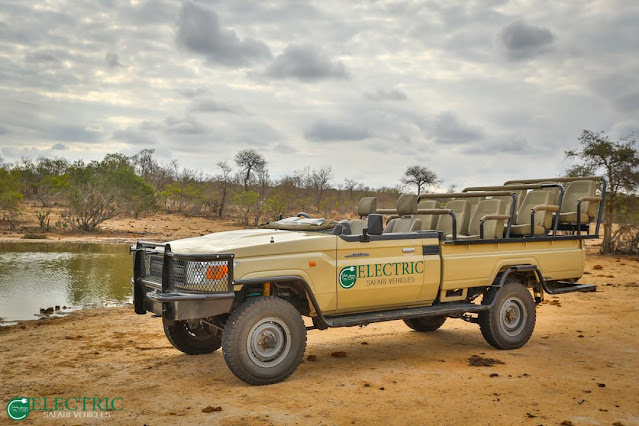 Electric vehicles help with both problems. It is intrinsically a large load, and with a high percentage of EV batteries connected to the grid when the vehicle is not in use, eg in the evening, this creates significant opportunities to improve load factor, substantially reducing the unit costs to other productive uses of electricity, and to cooking. The latter in particular offers a big environmental benefit. Electricity can substitute for firewood or charcoal, whose continued use has disastrous consequences for deforestation as well as a large carbon footprint. The scale of emissions from these unsustainable sources is comparable to that of diesel used as a transport fuel.

As an idealised solution, therefore, promotion of electric vehicles in Africa can provide a classic synergy in terms of reducing emissions, providing clean energy and assisting economic development. In itself it reduces harmful emissions, a global CO2 benefit, as well as localised city pollution. The key to the economics is that if the vehicles and their batteries are already there, some of the essential but very expensive storage requirement of renewable power systems is already in place.

The additional load permits more effective management of renewable systems and much higher load factors. Both these gains would have a big impact in reducing unit costs, and this in itself could create a virtuous circle of more affordable power, more productive use of that power, higher incomes and improved affordability, feeding back into further economies of scale, cheaper power, and less polluted cities.

In an earlier post[2], I discussed the benefits of eliminating traditional and unsustainable use of firewood or charcoal for domestic cooking. The potential reduction in CO2 emissions is huge. Charcoal use is widespread in the developing world and its elimination for a billion people (a conservative estimate of potential) could reduce global emissions by as much as 700 million tonnes or about 3 % of the total. The nature of the emissions externality is that the benefit accrues to the global community as a whole, not just to Africa. But the scale, with any reasonable valuation of carbon, is huge

The contribution from eliminating oil dependent road transport in Africa could be of a similar order of magnitude, with a similar global benefit.

How realistic is all this?

As electric vehicles take an increasing market share, some of the barriers are likely to fade away. Scale economies will bring down manufacturing costs and prices to consumers, along with a new generation of vehicles made in China or India, probably with more basic specifications but significantly lower costs. Electric vehicles combined with electric cooking could, as suggested above, mitigate the technical and economic problems in developing the power sector

The biggest barrier remains the quantum leap required of African power sectors, partly in terms of governance but even more in terms of the sheer amount of capital required. Help from development aid budgets will be a necessity. But, as I have suggested above, failure in this task should not be considered an option. The global economic cost of climate catastrophe, or the cost of expensive carbon extraction from the atmosphere (which we shall almost certainly be forced to adopt) could make African electrification a bargain form of carbon reduction for wealthier nations.

John Rhys on Energy, Climate and Carbon: FINANCIAL SUPPORT FOR ENVIRONMENTALLY SOUND POLICIES IN POORER COUNTRIES MAKES SENSE FOR EVERYONE. THE CASE OF FIREWOOD, CHARCOAL AND DEFORESTATION. (co2economics.blogspot.com)