Last week NASA reported that global temperatures in February 2016 had exceeded long term historical norms by a record amount, 1.35 degrees Centigrade above the long term average, taken for this purpose as the 1951-1980 average, and even further above estimates of the pre-industrial era. 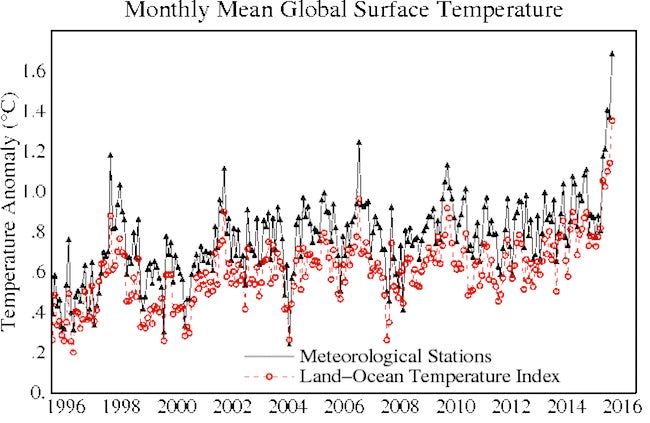 
It is rare for serious climate scientists to treat one month's data as conclusive evidence of anything, but in this case the dramatic and surprising scale of the temperature anomaly has caused some climate watchers to sound a note of alarm. This is partly because it follows on from a string of observations in 2015, itself a record year, which had already suggested that any temporary hiatus in warming, if it ever existed, was now at an end.

“We are in a kind of climate emergency now,” Stefan Rahmstorf of the Potsdam Institute of Climate Impact Research told the Sydney Morning Herald. “Governments have promised to act [to curb greenhouse gas emissions] and they need to do better than what they promised in Paris.”

The proximate cause for the dramatic rise in temperatures in 2015 and 2016 is the latest el Nino climate event. Even so the latest numbers suggest a rise, compared to the 1998 el Nino temperature spike, of about 0.45 degrees Centigrade. Climate sceptics have made much of the apparent "slowdown" or hiatus in warming since 1998, frequently claiming that there has been little or no increase in observed warming since 2000.

So will the climate sceptics finally admit reality?


One of the strongest and most professionally organised sceptic groups has been the Global Warming Policy Foundation (GWPF), closely associated with former UK Chancellor Nigel Lawson, and with a large number of prominent climate sceptics on its Academic Advisory Council.  These include academic and other figures prominent in the public debate such as Robert Carter, Ross McKitrick, Freeman Dyson, Richard Lindzen, Matt Ridley and others.  Elsewhere on this site we present a summary of the positions taken by a number of  GWPF authors, including those named above, in responding to the Royal Society on the subject of climate change, and a personal critique and summary of the positions taken by both parties. The prominence of these authors means that we are looking at the work of the most serious sceptics, presumably chosen from the GWPF's top academic support in order to argue the sceptic case.

It is very apparent from this critique that the GWPF authors rely heavily on the supposed hiatus in warming. In terms of hard evidence it has been their central claim.  This was always evidence of dubious quality, relying on a highly selective "cherry picking" of the time series data. In reality no serious scientist or statistician should have made the kind of claims the GWPF authors have made - averaged data continued to show a steady rise in temperature decade on decade. But it was also in strategic terms a foolish argument on which to place so much weight, since it was always true that the next el Nino was likely to demolish once and for all the spurious notion of a "hiatus". That is what has happened. The frequently repeated claim of an 18 year "pause" looks increasingly foolish in terms of the evidence.

We await the GWPF reaction. Most popular sceptic responses, on the evidence of past behaviour, are retreats to a position that temperature increase will be beneficial or does not matter, on the one hand, or refuge in conspiracy theory, coordinated falsification of data by the world's scientists and governments,  on the other.

How alarming is this? Delayed response and irreversibility.

It is difficult to judge whether the sudden apparent acceleration in warming should make us even more concerned about the underlying trend.  On past experience, the years following el Nino might be expected to take temperatures back towards the underlying upward trend. The NASA report may suggest that climate models are unlikely to be overestimating the pace of warming, but it is too early to suggest they are underestimating the climate effects. But there are two under-appreciated aspects of the science that should give cause for concern, at least on the risks of dangerous levels of warming.

The first is the very substantial time lags, the delay between any change in atmospheric concentrations of CO2 and the time at which any new temperature equilibrium is reached.  This is measured in decades. So any current overall warming attributable to CO2 may be the product of  actual atmospheric concentrations over a long period up to two decades previously.   Even if CO2 and other greenhouse gas emissions ceased altogether from this year, we would still have to wait many years to observe the full effects.

The second is the essential irreversibility, at least with current and easily foreseeable technology, of CO2 emissions. Every year that passes without halting emissions, or even curtailing their annual increase, condemns us to further future change which is essentially outside any human control.

Paris. Was it enough?


The Paris negotiations have been widely represented as a success, especially in the context of earlier failures. But in the absence of binding commitments it was always clear that real success would then depend on just how much progress the major emitting countries would make without the discipline of a negotiated constraint. The possibility of some dramatic temperature records this year, even if the underlying  climate model predictions remain broadly unchanged, may well provoke increased realisation of the gravity of our situation and pressure for more urgent measures.

Lawson somewhat grudgingly admits that there is a basis to the science although he seems to deny the scale of effect that your piece demonstrates. But he also argues that there is nothing we can do about it, that it is far too expensive, and that we should simply accept that we shall have to adapt. I think it would be helpful if you could start to address some of these questions. Apart from the continued denials of the "swivel-eyed" brigade, these seem to me to be the more serious questions for most people.