BATTERY CHOICE FOR POWER SYSTEMS. THE BENEFITS OF DIVERSITY


A colleague who researches battery technologies raised an interesting question. A lot of emphasis in battery research is placed on getting the highest possible energy efficiency, of which their Faraday or Coulombic efficiency is a major component. But what are the key parameters on which battery research should be focused to produce an ideal set of battery choices and options for the power sector? Faraday efficiency clearly matters but battery types have numerous technical and economic parameters, including weight, volume, charging and discharging rates, scalability, capital cost, losses in storage, physical degradation, and so on. The simple answer is ”horses for courses”; it all depends on the application. For power sector applications this takes us into some interesting questions of system economics, and the answers will differ for different geographies and different policy priorities. But there is room for diversity in battery technologies for power systems.


There are several parameters against which any battery or energy storage technology has to be judged and their relative importance may be highly context and application specific. The development of batteries for use in electric vehicles, for example, places a high premium on overall weight and volume and hence on energy density per kg or per litre. In low carbon power systems, the use of storage can provide big benefits in matching less flexible generation with consumer demand.  The mobility associated with high energy density can be a useful feature in local distribution networks, but for large scale application it is the impact on total cost that is the more critical factor. We can start to make some educated guesses about what the key parameters and trade-offs should be, especially when we start to consider the economics of batteries as part of a power system.


Key economic parameters in power generation are capital and operating costs. This leads to a familiar comparison in electricity economics, known as the cost polygon, in which the optimal balance between capital and operating costs is determined by the capacity utilisation (load factor) required of the generating plant. Plant choice for baseload or near continuous operation tends towards higher capital but lower fuel and running costs, and conversely for peaking plant towards lower capital but higher running costs. 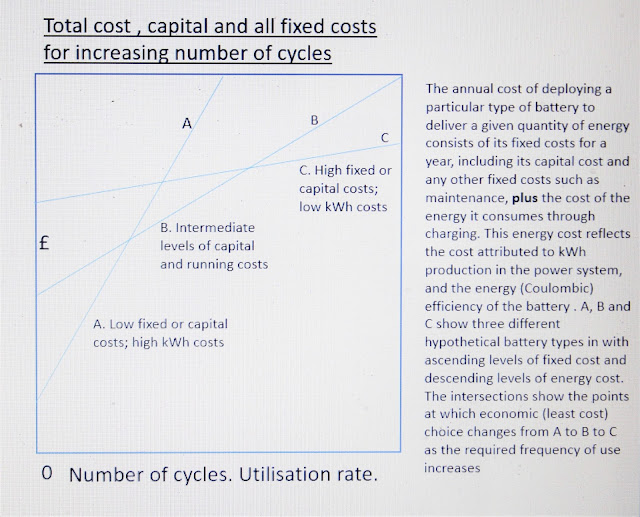 Corresponding trade-offs apply to deployment of battery and other storage technologies. Capital costs dominate when the requirement is for a small number of expected charge/ discharge cycles in a year, for example for seasonal storage or as peak capacity. Battery capital costs imply they are very unlikely to be suitable for seasonal storage, at least in the context of current and currently anticipated battery chemistries. Seasonal storage remains one of the big unresolved questions for geographies with strong seasonal loads. The most promising avenues to a solution for seasonal storage are currently seen as forms of chemical storage (eg hydrogen or ammonia), heat storage (for heating purposes), or possibly hydro storage in favourable geographies, rather than batteries. Some of these options will have much lower overall energy efficiencies of around 70% or less, compared to the best batteries with Faraday efficiencies[1] around 100%.


Energy costs are more important for a daily or more frequent cycle. If the main requirement of storage is to flatten the daily load curve, then a daily or twice daily cycle means that much more importance attaches to running or energy costs, and hence the Coulombic efficiency of the battery.


Prima facie it ought to be a simple matter to compare the economic benefits of a higher capital cost but more energy efficient battery with a lower capital cost but less efficient one. But there is a further question – what is the right way to assign a value to the cost of the energy that will be put into the battery when it is charged. This is a system economics question for the power sector in which the batteries will be operating, and the answer will not always be straightforward, for a number of reasons.


First, the question cannot be separated from an analysis of expectations as to how the system is going to operate and the states of the system when the batteries are called on to charge or discharge. The system marginal cost, for charging, and the system “value”, for discharging, will often vary considerably over the day and year. The cost may be zero or even negative when there is surplus generation, but very high at peak periods. So some analytical perspective is needed on future system operation. At the very least this implies some attempt at high level modelling of the future power system.


Second, for what are currently fossil based systems, costs and wholesale prices will provide only a limited guide to the valuation of energy saving. From a perspective of low carbon and climate policy objectives, which ought to inform a public policy assessment, it must be important to take account of the impacts of any choice on carbon emissions. Emissions have not historically been adequately priced to reflect their climate impacts and many European systems remain essentially fossil based, with fossil generation continuing to set the system marginal cost or wholesale price. So from this public policy perspective a heavy emphasis on Faraday efficiency looks to be fully justified on a relatively short to medium term perspective.


Third, if we look further ahead, to systems that will be based heavily or exclusively on low carbon generation sources such as renewables or nuclear, the question changes. It will be argued that batteries are often charged only when there is surplus renewable (or nuclear) power in the system, to be “spilled” into storage with a zero opportunity cost. In reality the system economics are not quite so favourable, and consideration only of short run marginal cost, ignoring capital requirements, is not sufficient. There will always be some premium on energy efficiency because higher efficiencies ultimately require a smaller quantity of total generating capacity and hence lower capital costs in generation.  But systems which can increasingly build in storage solutions are also likely to find a role for storage cycles with lower than daily frequency. This adds value to maintaining the option to deploy battery technologies which may be less efficient but have a substantially lower capital cost.


And where is this leading?


At least one battery firm has argued [2]that it is a “common myth that people would want to install battery storage to make money by buying cheap off-peak power and selling expensive on-peak power” – a gain that will often depend on very high energy efficiencies.  Instead the “fundamental value proposition” is the “capacity-like” properties of batteries, quick installation in constrained parts of the network, and rapid response to system demands on the grid.


It is therefore likely to be worth exploring alternative battery chemistries, especially if these have the potential to deliver much lower capital costs.[3] This provides power systems with more options, and there are likely to be plenty of conditions under which a lower energy efficiency is acceptable if it results in substantially lower capital costs. But the eventual choices will also be determined by the overall plant mix and the economic and operating characteristics of the power systems in particular geographies.

[1] 100% Faraday efficiency does not equate to 100% energy efficiency, since there are other sources of energy loss in an electrochemical system.
[2] This particular firm has been developing zinc-air batteries, claiming a significantly lower cost per kWh of storage capacity than lithium-ion.
[3] It may be helpful to give a very loose idea of comparative capital costs and performance. The Dinorwic pumped storage facility in North Wales is estimated to have cost some £425mn to completion in the 1980s, with an energy storage capacity of some 8 million kWh. In today’s money this suggests a cost of around £ 100 per kWh, a number comparable to some projections of future battery costs.  Pumped storage operates at around 75% efficiency over the storage cycle.