A recent (September) article in the journal Nature Geoscience has been quite widely reported as an indication previous scientific studies have over-estimated the extent of global warming. Many followers of climate science and observers of climate policies will have been surprised by some of the headlines. Not least, the stream of evidence over the last few years has, even to a casual observer, indicated global temperature increases very much in line with a strong upward temperature trend. Other indicators such as the rapid decline in Arctic sea ice, have offered little comfort, or suggestion that any of the earlier projections have been overestimates.


Has this turned out to be entirely a good news story? How has it been reported? And will it have a positive impact on the promotion of effective climate policies? Closer examination reveals some important qualifications, some additional information and potential for some dangerous misinterpretation of a piece of serious climate research. The worst possible conclusion to draw is that these revised estimates in any sense reduce the sense of urgency that should attach to climate policy.


First of all clarify what the paper actually tells us.


Just clicking on the Nature Geoscience link provides an abstract of the paper itself, a technical and suitably restrained summary of some recent climate modelling work based around, inter alia, a number of estimates of climate system parameters from the IPCC Fifth Assessment Report. It is reproduced at the end of this comment for the benefit of readers. In the abstract, the authors (who include my colleague Myles Allen from the Oxford Martin School) avoid dramatic language, and the strongest claim with obvious policy relevance was that “limiting warming to 1.5 °C is not yet a geophysical impossibility”.

The backdrop of course is that the Paris agreement adopted an aspirational target of 1.5 oC of warming, which had widely been seen by many climate experts as now beyond reach, even on the most optimistic policy assumptions. The relevance of the article is that, while many scientists may previously have estimated that the remaining “budget” of future CO2 emissions consistent with the target was impossibly small, the revisions suggest it may be larger, and closer to what is attainable tyrough effective policy. If the glass of acceptable CO2 concentration really is only 92% full rather than 98%, then the budget is four times as big. But four times a very small number is still a very small number, as the authors emphasise.


And some balancing bad news


Another report, due to be published shortly, but whose findings were previewed at the Oxford Energy Day, (Pfeiffer et al) has some much less welcome findings. Power generation, which currently contributes some 30% of CO2 emissions, is on course to emit much of the headroom identified as available for the 1.5 °C target. Currently operating power generators will absorb 41% and generators in pipeline another 36%, unless closed prematurely, underutilized or retro-fitted with CCS. This reduces the already very tight headroom for other (much harder to decarbonise) sectors, and for other GHGs.


How was the story reported?


First reports in the British press were on the whole fairly accurate. Typical was the Independent [or rather The I]. Computer modelling used a decade ago … may have forecast too much warming a study has found. The study does not play down the threat which climate change has to the environment, and maintains that major reductions in emissions must be attained.  But the findings indicate the danger may not be as acute as was previously thought.


Then the commentators moved in. Comment by Graham Stringer MP in the Daily Mail, for example, verged on the hysterical. This and similar comment from sources such as Breitbart led the authors to respond forcefully in The Guardian on the misrepresentation of their research.


But do these revised estimates cast doubt on the wider credibility of climate predictions, or lead us to consider whether the urgency of climate policy is understated.


The first point is easily answered. The potential revisions under discussion all lie comfortably within the range of future projections. They are in effect a small scale adjustment comfortably within the range of possible outcomes. The main reason for their potential importance is that they provide, prima facie, a slender piece of evidence that the 1.5 °C target may still be attainable.


Anyone still seduced by the views of Lord Lawson, the GWPF and others, that warming stopped in 1998, should simply examine the global temperature measurement of the last few years. The Lawson argument seized on an exceptional el Nino year (1998) and pretended that no warming could be detected. [El Nino events tend to produce substantial blips in temperature. This was always an entirely  specious argument, and is addressed in more depth elsewhere on this site (on the page SCIENCE VS SCEPTICISM),  and a wilful ignoring of the underlying temperature trends. Its fallacious nature was underlined, at least visually, by the return of an el Nino in 2015 and 2016, breaking global temperature records in successive years. 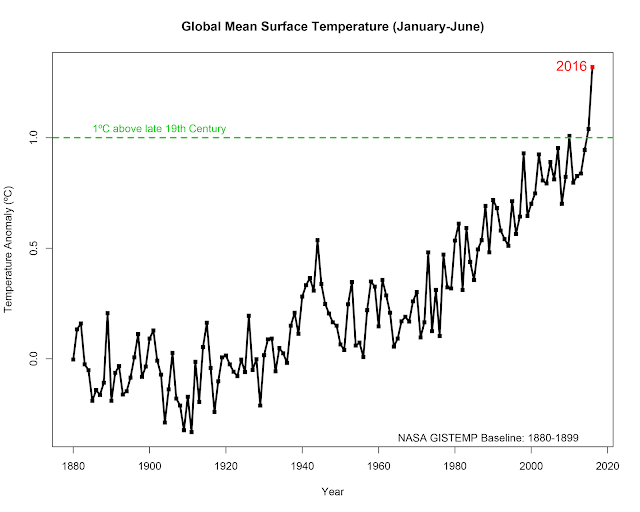 Does the extra headroom give us any reason to relax the urgency of climate policy?


We have already identified several reasons why not:


·         the scale of the downgrading is relatively trivial and well within the predicted ranges; in this sense it is no  more than a minor adjustment to best estimates proposed by one of the entities currently modelling climate


·         the small amount of extra emissions headroom in  is roughly equivalent to the “bad news” on fossil power generation, although much of this is, implicitly at least, already factored into policy making


At a deeper level though we need to recognise that there are some even more important fundamentals.


·         One is that the targets, whether for 1.5 °C or 2.0 °C, are to a large extent arbitrary. We do not know with real confidence that either is even “safe”, although they are often described as if they represented some kind of hard border between safety and disaster. Normal caution, of the kind we would exhibit in other contexts, should be the real driver for policy.


·         The second fundamental is that even much smaller levels of warming will have serious adverse consequences, some of which we are starting to see in changing weather patterns and the higher incidence of extreme events. There is therefore a massive social cost from the levels of emission that we have allowed to date. The corresponding benefit of urgent action is huge.


Abstract. The Paris Agreement has opened debate on whether limiting warming to 1.5 °C is compatible with current emission pledges and warming of about 0.9 °C from the mid-nineteenth century to the present decade. We show that limiting cumulative post-2015 CO2 emissions to about 200 GtC would limit post-2015 warming to less than 0.6 °C in 66% of Earth system model members of the CMIP5 ensemble with no mitigation of other climate drivers, increasing to 240 GtC with ambitious non-CO2 mitigation. We combine a simple climate–carbon-cycle model with estimated ranges for key climate system properties from the IPCC Fifth Assessment Report. Assuming emissions peak and decline to below current levels by 2030, and continue thereafter on a much steeper decline, which would be historically unprecedented but consistent with a standard ambitious mitigation scenario (RCP2.6), results in a likely range of peak warming of 1.2–2.0 °C above the mid-nineteenth century. If CO2 emissions are continuously adjusted over time to limit 2100 warming to 1.5 °C, with ambitious non-CO2 mitigation, net future cumulative CO2 emissions are unlikely to prove less than 250 GtC and unlikely greater than 540 GtC. Hence, limiting warming to 1.5 °C is not yet a geophysical impossibility, but is likely to require delivery on strengthened pledges for 2030 followed by challengingly deep and rapid mitigation. Strengthening near-term emissions reductions would hedge against a high climate response or subsequent reduction rates proving economically, technically or politically unfeasible.