THE IPAT EQUATION AND THE KAYA IDENTITY. A CONVENIENT MEASURE FOR UNDERSTANDING CLIMATE ISSUES?

What Matters Most?  Population, GDP Growth or Technology.

A common theme in popular discussion of climate change, or rather of whether mitigation is feasible, is its attribution to different factors, notably population growth or economic growth, and the reliance of solutions on technology. This also affects any discussion of historic responsibility for CO2 emissions. It is a highly emotive subject, particularly in relation to population control or the limitation of growth, so it is at least worth a cursory look at what the hard statistics tell us.

The so-called IPAT equation represents a general description of human influence on the environment: IMPACT (of CO2) = [POPULATION] X [AFFLUENCE] X [TECHNOLOGY]. A popular and useful way of interpreting this for CO2 emissions for the energy sector is the so-called Kaya Decomposition. Affluence is measured as GDP per capita and technology is further decomposed as energy per unit of GDP, and CO2 emitted per unit of energy. The Kaya identity[1] is:

Global Picture. The IPCC Fifth Assessment Report (2014) provided a useful breakdown of changes in global CO2 emissions over several decades, based on this identity: 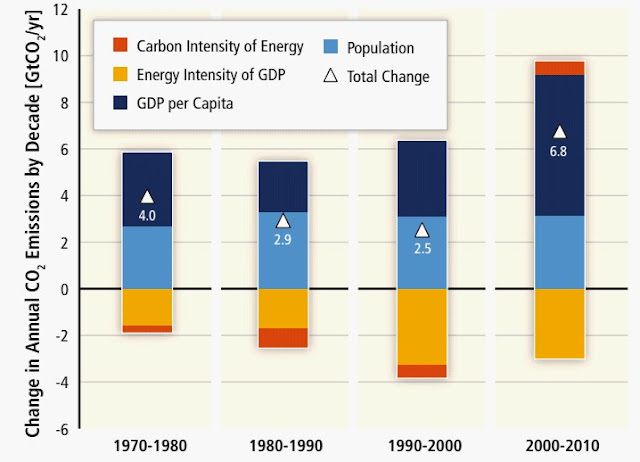 In the three decades from 1970 to 2000, population growth and increasing incomes contributed similar amounts to the rise in emissions, but the energy intensity of GDP fell quite sharply contributing a significant saving to the level of emissions that might otherwise have been expected.

The energy intensity of GDP was a significant offsetting factor, whose importance rose in 1990-2000, possibly reflecting the longer term impact of higher energy prices and uncertainties in the 1970s and 1980s. However efforts to reduce the carbon emissions associated with energy use played only a limited role in reducing emissions. This is unfortunate since reduction of dependence on fossil fuels  this is a key component of emissions reduction hopes, and this factor actually moved in the wrong direction from 2000-2010, again reflecting in part the Chinese dependence on coal.

From 2000 to 2010 the importance of rising incomes rose relative to population factors, reflecting inter alia the rapid growth of the Chinese economy. The overall outcome was particularly depressing as the decade showed a sharp increase in emissions and lessening impact of the mitigating factors.

But this decomposition can change significantly over time. Global averages also conceal major differences  between countries, and there are some optimistic signals. A similar but more recent chart for China (Safonov reference below) shows overall reductions (to 2016), and significantly more reductions attributable to less energy intensive GDP and less carbon intensive energy. For China, population growth has not been a significant factor over this period, but income growth continues to be so. 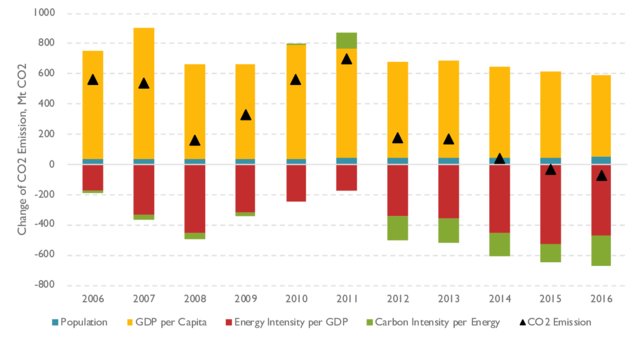 Similarly more optimistic trends have been observed in the USA to 2015, but with higher influence from population, less from economic growth, and significant reductions attributable to less energy intensive GDP and less carbon intensive energy consumption.

An interesting comparison of country by country decomposition for periods before and after the financial crash of 2008 is given in a fairly recent paper by Sadorsky, referenced below. It shows huge diversity in findings between countries, exemplified in the following chart for four countries: 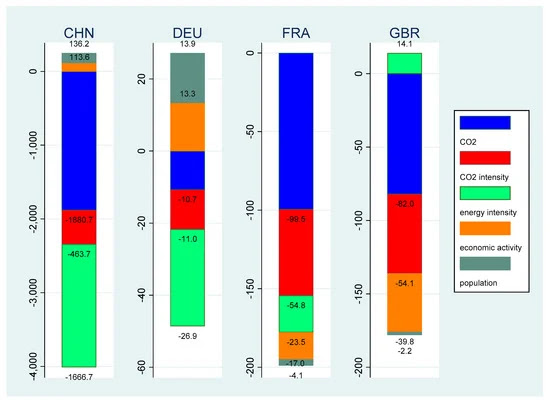 NB. This chart has a rather more complex interpretation, as it represents the changes between two very distinct periods. The reader is referred to the Sadorsky article

Given the pace of reduction required to reach net zero by 2050, the Kaya emphasis will have to shift to much greater emphasis on decarbonising energy. Population cannot be subject to substantial percentage reduction, and the drive for higher incomes is unlikely to stop. There is some scope for further weakening of the link between affluence and energy use, but the heavy lifting will depend very substantially on decarbonisation of energy, starting with the power sector and expanding the power sector into transport and heating.

For a fuller “actuarial explanation and justification for the Kaya identity, this reference may help  Kaya identity_JC Final 050219.pdf (actuaries.org.uk)

[1] Since the identity is multiplicative, a logarithmic transformation is usually used in the calculation of the factor contributions.