A CLIMATE FOCUSED ELECTION IN THE UK? IT’S NOT HAPPENING.

Because that would mean confronting other difficult issues too.


Positive policies also bring with them more inconvenient truths. With climate, policies threaten entrenched ideologies[1]. Politicians are reluctant to talk honestly about costs at election time. But the biggest silence is around the fundamental implications for trade of any realistic global climate regime, and trade remains at the centre of the Brexit dilemma.
It was widely supposed, only a few months ago, that climate change would be a major feature in the next UK election. This year has seen growing public concern over the threat of climate change as the most important challenge our society has to face. An eight country poll[2] revealed widespread alarm that the crisis is on the brink of spinning out of control, with 64% in the UK agreeing that “time is running out to save the planet”.  At least three-quarters of the public think there is a “climate emergency”, and of climate breakdown risk as “extremely dangerous”.
Climate breakdown was viewed as the most important issue facing the world, ahead of migration, terrorism and the global economy, in seven out of the eight countries surveyed. Only in the US did it come third, behind terrorism and (understandably given the US dismal ranking in international health comparisons) affordable healthcare. An overwhelming majority in each country – 74% in Britain – said they were already seeing the influence of the climate crisis in extreme weather events, such as heatwaves and floods, and around two-thirds described it as a direct threat to ordinary people in their country.


Moreover, the last few months have brought more extreme weather events across the globe, just as anticipated by the science, and a rising level of alarm over increasing carbon emissions and global governmental failure to take effective action. And we have also seen direct action protests from the Extinction Rebellion movement. Prima facie the public is “way ahead” of politicians in recognising the scale of the climate crisis.


But in the election campaign so far climate has been the dog that does’nt bark. All the major parties are committed to the zero carbon by 2050 target or earlier, but since they will never be held to account for failure on that timescale, what matters more is the credibility of their specific policies. The smaller parties have made the best efforts, but the current Prime Minister appears reluctant to debate the subject in front of the electorate, perhaps understandably given the climate sceptic history of many in his party. Labour has a better story to tell, not least with Blair’s ground-breaking 2008 Climate Act, but has preferred to concentrate on other issues.


So why is this critical subject getting so little attention.


The real reason for reticence on climate is that it would put a spotlight on trade, and raise difficult questions about Britain’s future post Brexit.


Both major parties are anxious to avoid any discussion whatsoever of the future for British trading relationships with the rest of the world. The Conservative government is promoting a “Get Brexit done!” message in the hope that it can avoid impossible to answer questions of exactly what benefits will flow from that, and in the certain knowledge that the actual outcome will be strongly negative if not disastrous. The Labour Party is also trying to avoid the subject altogether in its campaigning, in the vain hope of satisfying fundamentally opposed sections of the electorate, and moving on to what are (for Labour) “safer” subjects. 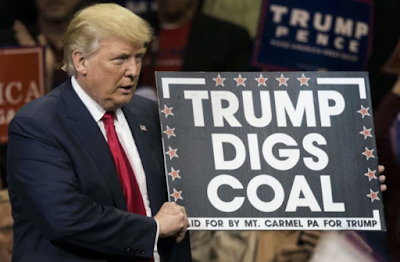 To see why the Conservatives are anxious to avoid scrutiny, we need look no further than the complications posed by their ambitions for a US trade deal. Since 2015, US Trade Representatives are bound by Congress not to include mention of greenhouse gas emission reductions in trade agreements and there are no prospects this ban will be lifted in the near future.[3]


Under any viable global regime climate, trade policy can be an important mechanism to incentivise and facilitate participation in global agreements to limit emissions. There are at least four potential approaches[4] that can impact on climate policies:


-       sanctions against non-participation in and non-compliance with international agreements ;


-       placing more of the cost of abatement on the responsible parties, whether in production or consumption; and


-       maintaining a free-trade regime that allows and encourages technology transfers.


Conversely dysfunctional trade agreements can have the opposite effect. It has been claimed[5] that the NAFTA agreement locks North America into continued exploitation of the dirtiest fossil fuels.


It is immediately clear why a US President, who considers climate science a hoax and wants an “America first” trade policy, and whose political base includes huge coal interests, would not want the subject mentioned in trade talks. The US still has substantial coal exports to Europe, and will not want to see any measures, such as international agreement on carbon pricing, or even a limited bilateral accommodation, that would reduce the competitiveness of its own industry. In addition the US has a longstanding interest, most evident in pharmaceuticals, in allowing greater opportunities to exploit intellectual property rights. In the climate policy context, this limits the rate of transfer of low carbon technologies to developing countries, generally those with the highest rates of growth in energy use and CO2 emissions.


Against this background the EU, strongly influenced by the UK and France, and despite some of the weaknesses and limitations in its climate policies, has been one of a very small number of major economies taking the climate issue seriously.


So, on the one hand we have a Conservative government reluctant to admit that its break with the EU, and promised strategy of a US trade deal, will almost certainly reduce its international influence on climate, and seriously damage future prospects for successful global policies. On the other is a Labour party, alarmed by the prospect that too much focus on climate will spill over into the Brexit issues it is trying to avoid.

[1] The biggest connection is that between neo-liberal orthodoxy, with its emphasis on a small state and deregulation, and its support for unsubstantiated denial of climate science.
[2] https://www.theguardian.com/environment/2019/sep/18/climate-crisis-seen-as-most-important-issue-by-public-poll-shows . The countries were UK, US, Canada, Brazil, Poland, Germany, Italy and France.

[3] This is referenced in the recent leaked documents on US/UK trade negotiations, and appears to be a well established US position.
[4]  Trade and Climate Change: The Challenges Ahead. 2010.. Jaime de Melo (jaime.demelo@unige.ch) and Nicole Mathys

[5] https://canadians.org/sites/default/files/publications/report-nafta-people-or-polluters.pdf
I have not tried to verify this claim.
Posted by John Rhys at 11:51 AM