GREENS WANT A HUNDRED BILLION A YEAR OF PUBLIC SPEND TO DECARBONISE. THE COMMITMENT IS WELCOME, BUT HOW MUCH IS NECESSARY?

The UK’s Green Party rightly treats climate change as the defining issue of our time, but what is the financial and policy credibility of its proposals?  We must be prepared to spend what it takes, but money is not necessarily the biggest obstacle. Focus needs to be on the practicalities.

The Green Party manifesto promises an annual budget of £ 100 billion to realise the decarbonisation of the UK economy. Some people may fear that this makes policies to “save the planet” unaffordable, but the spending and borrowing to achieve that  should not necessarily be seen as the main question.


If high levels of spending on decarbonisation are effective, they can be justified.


The issue of climate change is rapidly becoming a major priority among the public. There is an increasing recognition by climate scientists that the world will, collectively, have to attain “net zero” carbon emissions in the not too distant future. The likely overshoot, together with any failure to fully decarbonise sectors such as agriculture and aviation, or policy failures in some countries, mean that the global economy will have to find the funds for direct extraction of CO2 from the atmosphere. Even the most optimistic views of the still undeveloped sequestration technologies for direct extraction find it hard to come up with future estimates that are realistically much below $200 per tonne[1].


This means that current CO2 emissions themselves represent a particularly insidious form of borrowing. It is borrowing that requires a future repayment in kind (ie carbon sequestration to deal with past carbon emissions). If, globally, we are already on track to be at or above sustainable targets compatible with avoiding catastrophic change, then the future burden will include the cost of removing much or even all of current emissions. In the end we will, collectively, be forced to pay what it takes to deal with the problems, or to face the even more expensive consequences.


With current annual GHG emissions in the UK running at close to 500 million tonnes of CO2 equivalent (465 in 2017), our current activity is, each year, potentially imposing a future "climate debt" of perhaps $100 billion on future citizens of somewhere who will have to pay for the clean-up. The disturbing nature of this debt is of course concealed by the fact that it remains unmonetized, and also that it simply forms part of a global pool, responsibility for which cannot easily be re-allocated to individual agents or countries.


On this basis the Green Party propositions for these extremely high levels of public spending, and the associated borrowing, are not intrinsically unreasonable or outrageous. Long term borrowing, in a non-monetised form, is what we are doing now. But that in itself does not prove the need for quite such a large public spend as the best policy now. 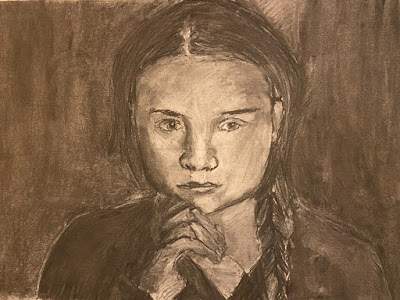 We shall not be forgiven.  (Charcoal drawing, Nina)


But is this a realistic or even a necessary proposition for public spending?


The first qualification to make is that the estimate of what can be usefully spent is higher than most previous estimates. The Stern Review, hugely influential in promoting the low carbon agenda, suggested that perhaps between one and two percent of global GDP needed to be devoted to decarbonisation and other measures to reduce GHG. That would be consistent with an annual spend in the £20-40 billion range. Stern argued, correctly, that this represented no more than a six to twelve month delay in reaching a given level of income by 2050.

A second qualification is that this does not necessarily equate to this level of public spending. At least part of this spend will, eventually, take the form of spending by households and businesses as they adapt to the future. That may for example include personal investment in electric vehicles or in adaptation of domestic heating systems to conform to new low carbon standards.

A third qualification is that it may simply not be possible for us to spend, usefully and quickly, the amount of money suggested by the Green’s budget. Electric vehicles, heat networks, and heat pumps are all a long slog and it is unlikely that we have the labour or the skills to do all those things at the speed the Green Party programme implies.


Where Greens are right of course is that we and others need to be doing more, and faster. In particular we should be putting in place the institutions that will in due course facilitate the investments we need. Elsewhere I have proposed the idea of a National Heat Authority to promote and coordinate plans for carbon-free heat, and to initiate local proposals for (up to) city-scale heat networks which may in due course be managed and financed through local authorities. A very effective use of the money, too, if the political will can be found and successful project implementation assured, may well be to support some of the initiatives to promote climate compatible growth in the developing world.


There are plenty of feasible options available which are essential to accelerating our current downward trend in emissions, and may help postpone reliance on actual carbon sequestration. We certainly need to spend significantly more, but not necessarily, yet, in UK located investments, on the scale that the Green Party has proposed.


As a global community we should be taking action, to the practical limits, to mitigate climate change. And in its level of ambition the Green Party deserves our wholehearted support. Greta Thunberg is right. We shall not be forgiven if we fail.


[1] One major issue for costs is that not only does the CO2 have to separated, it then has to be safely stored, either by a further process of combining with other elements to a solid state, or by the energy intensive process of pumping into deep oceans.
Posted by John Rhys at 4:56 PM