CORONAVIRUS. A THREAT NOT RECOGNISED. SOME LESSONS FOR THE POLITICS OF CLIMATE CHANGE.

The same political fault lines are emerging. “The cure is worse than the disease” refrain echoes the revisionist climate sceptic arguments. The coronavirus disproportionately attacks the old. Climate change should be of most concern to the young. And until it happened very few of us rated pandemics or disease as a major threat.

This pandemic was barely on the radar 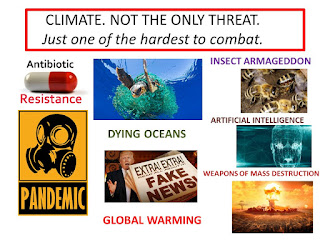 In autumn 2019 I gave a presentation on climate science and the role of energy policy in combatting climate change. I began by reminding the audience that climate change was just one of the major threats facing humanity.
It’s hard to compare the magnitude of future unknowns. The arrival of a new respiratory pandemic has long been known by the medical profession to be a certainty. “Not if, but when ….”.  But it was by no means clear that a global pandemic was on any measure the greatest threat to the future of humanity. After all, we had survived the plagues of the Middle Ages without any of the benefits of modern science or medicine. Bubonic plague, if and when it recurs, is easily treatable with antibiotics, and we expect a vaccine for Covid 19. And the “Spanish flu” of 1918, despite killing at least 50 million people worldwide, has largely disappeared from folk memory.
Also, at least in the abstract, a projected fatality rate of up to one or two percent sounds small when compared with James Lovelock’s sometime prediction of an 80% decline in the human population by the end of the century as a result of climate change – words that imply an unimaginable level of human suffering.
Significantly, a recent poll[1] across eight countries asked respondents to name the three issues, from a list of threats, that they saw as the world’s top priority. Climate change topped the list[2], named by 50% in the UK and 68% in Germany. Disease, including pandemics, was listed by only 7%. This was a collective comparison against which it is hard to mount a rational argument.
And yet …. What a difference a few months can make to our immediate priorities!  The coronavirus pandemic, barely on the radar in the poll, is set to transform our lives, and every aspect of global and national economies, in a way that few would have imagined just a few weeks ago. The response to this threat, despite its lower ranking, has been justifiably huge.
Clearly our political and economic choices only lead us to take effective action when the threat takes a concrete and immediate form. This is the clearest possible demonstration of our consistent collective inadequacy in dealing with risk.

So what other lessons and parallels could we draw for the less immediate but ultimately more dangerous threat of climate change?

Market failure and the end of “small state” market fundamentalism. Once again, and this will be a common thread (I suspect) in every significant global threat, a core element is the form of market failure defined by the economic concept of externality[3]. Agents (people, firms or national governments) pursuing their own individual, corporate or  parochial interests, whether in burning fossil fuel, or in continuing to work, travel and socialise, and refusing to self-isolate, cause damage to others, or to our collective future, which substantially exceed the value to the individuals concerned. The remedies for these mutually destructive behaviours all depend on some form of government intervention, either in prices/ taxes or direct regulation. This has already started to happen in climate and energy policies, but is much more obvious and dramatic in dealing with the pandemic. It is hard to see ideological arguments against state intervention continuing to have the traction they had in the early part of this century.
Experts. Experts are back on centre stage. In the UK they have so far been accorded a deference that was never shown to climate scientists. The degree of convergence between experts on the pandemic will probably be fairly similar to that in climate science. There is little or no divergence on basics, but there can be significant disagreements on particular features and on policy priorities.
Political fault lines. “The cure is worse than the disease” refrain echoes the revisionist climate sceptic arguments, that we cannot afford the remedies.  To some extent the opposing camps are made up of the same people as before, particularly in the USA where Republicans from the “Guns, Coal, Freedom” lobby of climate science denial are far more likely to talk about the virus as a “Democratic hoax” and oppose effective government action.  The short-term costs of combatting the virus may well involve losses of 5% of GDP or more, compared to the conventional assumption (following Stern) of an annual 2% of GDP as the cost of mitigating climate change. Since permanent lockdown is not a viable strategy, some trade-off will be required. For the pandemic the balance of economic costs against lives saved is probably closer than the balance of cost against long term survival and climate protection, but the arguments will have similarities.
The generational divide.  Here there is a parallel but a major difference. The parallel is the potentially divergent interests of the old and the young. With the pandemic it is almost certainly older people who benefit disproportionately from action to contain the pandemic, while it is younger people who bear the immediate cost. With climate change the reverse is the case. The old will not suffer the worst consequences of climate change. The young will.
International Cooperation and Development. This year’s vital climate summit, COP 26, will almost certainly either be postponed or suffer from inadequate preparation. Especially in the UK there will be little political bandwidth left to deal with the massive challenges of getting international agreement on climate matters. But this has never been more important, and the pandemic, like the financial crisis, emphasises once again the importance of international coordination, cooperation and development. Like climate change, pandemics do not recognise borders.

All the above are themes to which, I suspect, we shall return again and again.
[1] https://www.theguardian.com/environment/2019/sep/18/climate-crisis-seen-as-most-important-issue-by-public-poll-shows . The countries were UK, US, Canada, Brazil, Poland, Germany, Italy and France.

[2] Full details of this poll can be found at this link: https://www.hopenothate.org.uk/2019/09/20/climate-change-wont-just-cause-extreme-weather-but-extreme-politics/