CARBON EMISSIONS AND TRADE WITH CHINA

Should we be doing more to limit our trade with China, if we are serious about having a global effect on emissions rather than concentrating on purely domestic issues?
[Third in a series originating in a set of questions put by sixth form students.
I should also thank Environmental Change Institute colleagues.
Their ideas have inspired a number of my comments.]


Trade and climate connections are many, so a full answer has several dimensions. They relate to the amount of CO2 emissions embedded in the manufactured goods we process, to comparison of manufacturing methods and energy policies in different countries, to fuel use in shipping, to the international norms that govern trade, and potentially to the enforcement, if any, of international agreements.


In the current international system of accounting for greenhouse gas emissions, they are generally attributed to the country where they enter the atmosphere, regardless of where any final products go.  This limits our understanding of the full impacts of our own national consumption.  One illustration is the apparently very substantial reduction in UK emissions since 1990. Closer examination reveals this was due, not just to the coal to gas transition or the growth in renewable energy, but in large measure to the de-industrialisation of the UK in the 1980s and 1990s under the Thatcher government. In other words since 1990 the UK has exported much of its manufacturing industry and the CO2 emissions that went with it. The reduction in our carbon footprint is less than we occasionally pretend.

So it is sensible to look beyond the patterns of energy use within the UK, as well as beyond our own personal choices within the home and in personal travel. There will be an embedded carbon footprint in all the goods and services we purchase. If we all reduced our consumption of manufactured goods, but especially those that have a high carbon content, then that would certainly be an important impact. It is not always easy to tell which are the worst industries in causing emissions, but one recent report by the World Bank has claimed that the fashion industry is responsible for 10% of global emissions, more than aviation and shipping combined.
[1]

It’s almost impossible for individual consumers to make meaningful calculations of the carbon footprint of different products, but we can collectively make sensible choices through trade policy. It will be important to trade with countries that have strong environmental policies and are willing to take action on reducing emissions, and setting meaningful targets, like the European Union. Goods produced in those countries will, over time, tend to have a significantly lower carbon footprint than others, especially as their emissions reduction policies start to bear fruit.

Those policies are now starting to impact on, and create tensions for, trade policy. As the EU seeks to avoid simply exporting its own manufacturing to countries with less commitment to reducing emissions, it is proposing measures that will ultimately amount to a carbon adjustment tax at the border, for countries that are not part of the EU’s own ambitious emissions reduction programme. We should expect to see this, and its reconciliation with WTO rules on trade, as a major source of controversy over the next few years.

And imports from China?

However most of the UK’s international imports (and their embodied carbon) are not from China.[2]  China accounts for only about 7% of UK imports, about the same as France but with a higher proportion of manufactures, and significantly less than the USA and Germany at about 11% each. A further complication is that the carbon footprint of your purchase will depend on how what you are buying is manufactured in China, and whether the process there results in more or less carbon emissions than it would if you were buying a similar product from somewhere else.

But we should be careful not to overstate the negative impact of China on our carbon footprint. China currently has a very high share of the world's manufacturing and the emissions that go alongside; and they also have what is almost certainly an excessive amount of coal-fired capacity, much of which is under-utilised and may eventually be retired early. On the other hand they have also been very active in developing and promoting low carbon technologies, including wind, solar and nuclear. And they are themselves very vulnerable to climate change so they have some strong incentives to improve. 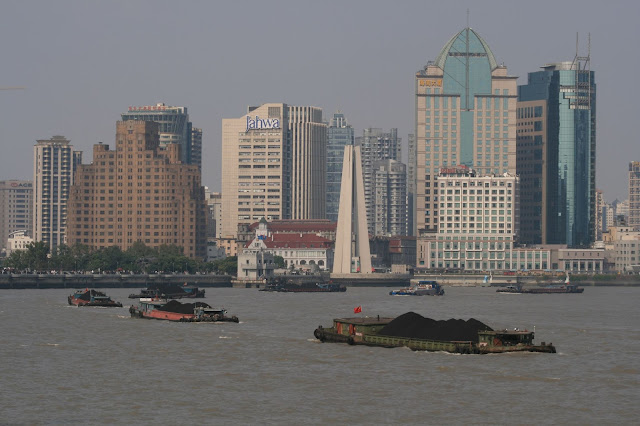 China has other emissions problems, particularly with city air pollution.  The Chinese city of Shenzhen, with a population similar to London, has 17,000 electric buses (in part to improve air quality), whereas London has 200.  In terms of emissions generated per head of population, China ranks well below Saudi Arabia, Australia, the United States and many other countries, although surprisingly it is above France.

Surprisingly, and although shipping is a significant contributor to global emissions, the carbon footprint of the freight involved in trade will be a small part of the total and will usually be less important than the footprint involved in manufacture. Other things being equal it makes sense to trade with your neighbours, but other than for obvious bulk items or sometimes for lower value perishable items where air freight is involved, the distance to market will not usually be a critical factor.
Benito Mueller gives an interesting example.[3]  “According to DfID, … the emissions produced by growing flowers in Kenya and flying them to the UK can be less than a fifth of those grown in heated and lighted greenhouses in Holland.”
But emissions from freight and food miles are topics for another day.

And the lessons from this analysis?

The carbon footprint of the manufactured goods we buy does matter.
“Fast fashion” accounts for a surprisingly high proportion of global emissions.
We cannot avoid the connections between climate-related issues and trade policy.
China accounts for quite a small proportion of our total imports.
Distance will usually be less important than the carbon content of the means of production in different countries. Food miles will not always be a good indicator of environmental credentials..

[1] I have not so far found an authoritative estimate of the contribution of motor manufacturing, but its contribution appears to be less than 10%, although it is clearly one of the larger contributors.
[2] Parliamentary research briefing. Number 7379, 5 November 2019. Statistics on UK trade with China.  https://researchbriefings.files.parliament.uk/documents/CBP-7379/CBP-7379.pdf